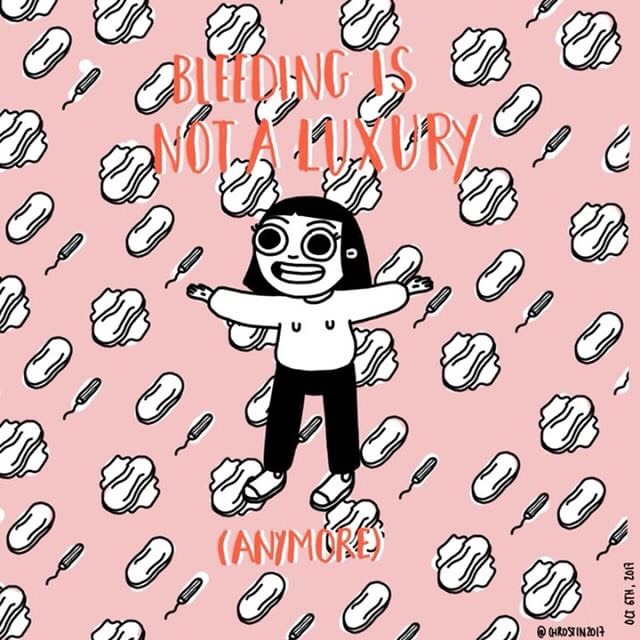 Why is there such a fuss about periods? Menstruation is something natural, something we all know about, but it’s not a topic talked about easily or often. That’s why we decided to shed light on the stigma around periods and its global consequences for women and girls. Not everybody with a monthly period identifies as female though, and we want to be clear it’s not our bodies that define our gender. For this reason, not only women can have periods. As an international organization, we are lucky to work with people from around the world, and so we took the chance to ask them what their cultures associate with periods.

Menstruation is the healthy discharge of blood from the uterus that happens on a monthly basis. It is one of the main signs a female (or somebody with a uterus, so to say) has reached puberty and it means that your body is functioning properly. Generally, a period occurs over 3-7 days in which there is bleeding, accompanied by cramps and pain, though this varies from person to person. Before the period, some of us experience the “premenstrual syndrome” (PMS) which is characterized by tender breasts, bloating, and feeling tired or irritable.

Stigma around menstruation exists in many different ways and contexts

So, menstruation is a pretty normal thing, although sometimes uncomfortable, that more than 50% of the world’s population roughly between age 12 and 50 experience on a regular basis. Yet, stigma around menstruation is prevalent. We collected cultural stigmas from a variety of places and realized that some prejudices and taboos are almost international. Most of those menstruating will experience them during their lifetime. For example, the idea that you should not talk or complain about your period. You should keep it to yourself. Buying or handling pads or tampons is something to be done in secret or at least in private. Plus, it’s seen as embarrassing when men buy menstrual hygiene products for their partners, friends or sisters. There is also the prejudice that women become moody or emotional during or before their period. Because of this, women are often judged as incapable, unpredictable, and illogical during this time, even in the workplace.

There is a widespread belief that menstruation blood is bad or contaminated, and that women who are on their period are not clean or impure. In many different cultures and contexts, women and girls who are on their period are prohibited from doing certain activities. For instance, in Uganda, girls are not supposed to visit gardens or fields. Crops might die or stop growing. In Zambia, menstruating women are not supposed to be in the same room as a newborn baby as it could harm the child.  Women also should not visit church or talk or sit close to the pastor. In Malawi and Zambia, women are discouraged from cooking with salt, and generally should not eat certain types of food. Many girls in India are even excluded from touching their family members at all while on their period.

How does this affect us?

It’s almost funny how something that ensures the reproduction of human life is almost always regarded as gross or taboo. This creates huge challenges for those menstruating. As our examples from above show, the stigma and false myths around menstruation have effects on all spheres of life. Girls are excluded from attending school, being with their families and living their everyday life. Missing school and being isolated not only affect the individual’s self-esteem, it also creates long-term disadvantages in their careers and ability to take care of themselves and their families. Even in Great Britain, there are accounts of girls not attending school while on their period because their families could not afford the necessary sanitary products. Additional to the stress and barriers caused by menstruation, there is also unneglectable financial burden.

As we established, people can’t choose or change their periods. This monthly flow comes every month between age 12 to 50 on average, which accounts for around 444 times in life. An average woman might use 10.000 – 17.000 tampons or pads in her lifetime. Depending on where you live and what sanitary products cost there, that creates an extra monthly cost of 2 – 9$ (Uk, Germany, Tanzania, USA). And of course that does not account for painkillers and chocolate!

Is monthly bleeding a luxury?

Why should monthly cramps and their incumbent burdens be a luxury, you may ask. Well, we don’t know either, but this is what the current tax category of sanitary products implies. What we are talking about is the so-called “tampon tax”; it covers all menstrual hygiene products, not just tampons. In most countries, there is a difference in VAT, value-added taxation, between basic needs products and “unnecessary” items. Currently, the higher, non basic VAT is levied on menstrual hygiene products in most countries in the world  which means that these products are seen as luxury.

For example in Germany, VAT is 7% for basic needs goods (which even include such “necessities” as fresh-cut flours and caviar), and 19% for products that are not deemed necessary: like tampons. What’s the big difference between fish and human eggs? In Slovakia it’s even 20%.

But hey, there’s also some positive examples! In Ireland, Jamaica, Nicaragua, Nigeria, Tanzania, Lebanon and Kenya there is no VAT and also no import tax on sanitary products. Since Ireland didn’t have the tax before joining the EU, it didn’t have to introduce it and is the only EU-member that beats the EU’s minimal tax of 5%.

After a successful petition in summer 2015, Canada also got rid of the tampon tax. Spain, the Netherlands and France followed Canada’s lead and decreased their taxes heavily. Just last month, Belgium got rid of it too, and our friend and comic artist Chrostin celebrated this with a picture.

October 6th, Belgium announced the 'tampon tax' on sanitary products will be cut to 6% instead of 21. Tampons and pads were considered as a luxury product, but we all know we don't bleed for fun.❣️This is a very important step into making feminine hygiene products more accessible. There are a bunch of alternatives, they are often more expensive, but the product use can last for years so it's a good investment.

So, how is the stigma of periods connected to high taxes on sanitary products?

One leads to the other. The stigma keeps us from talking about periods, and that’s why policies affecting these consequences change very slowly.

As mentioned earlier, when girls are excluded from attending school because of their period, they are less likely to lead successful careers.  Later on that translates into missing work days, struggling through cramps and pain, and hiding a part of your natural bodily functions. It all adds up, and creates additional  barriers for women to get into decision-making positions. And once you’re there, your male colleagues might use the classic “Oh she’s on her period” as an excuse to not take your ideas seriously.

Women have not been in positions of power for the longest time, and that’s why their needs are underrepresented in high level decision making spaces. Their issues don’t come up because the majority of decision-makers do not experience them personally. Those affected are told not to mention their periods, and everybody else just forgets about it due to the silence around it. Politics have always been a male dominated field and women in any high level position are encouraged to be “one of the boys”. Women don’t speak up because they are afraid of being ridiculed. For example, parliamentarians in Malaysia burst out laughing when an online petition on lowering taxes on sanitary products was presented in 2015. 90% of Malaysian parliamentarians are male, so maybe that’s why the petition made them chuckle. How can they understand the petition if they never heard about the effects of the tax?

This creates politics that do not see or respect women’s issues (which unfortunately is true for many other marginalized groups!). Rupi Kaur’s famous photo project on periods is a great example for both bringing the topic up and the backlash she faced for it. A photo of a blood stain on cloth needed to be banned on Instagram? This is the shame and stigma we’re talking about.

It’s time to take women’s issues seriously because really, they are human issues, and these barriers are hurting us as societies.  In order to get rid of these barriers, we need to change the culture around menstruation. There are many things we can do, and many are already happening. Let it be workshops for parents and in schools, or creative methods like a comic book. Even having one conversation each week, especially with both boys and girls, can help to normalize this topic.

We’d like to thank the following individuals for contributing to this article and sharing their perspectives and experiences with menstrual stigma. All of these people are involved with IYAFP and are doing incredible work to bring youth rights to sexual and reproductive health.

Norhan Bader and Marietta Wildt are on the Executive Board of the International Youth Alliance for Family Planning.

Norhan is from Egypt and a physician, researcher, and advocate on sexual rights and reproductive health.

Marietta is based in Germany and uses her background in academia, grassroot activism and NGO advocacy to support youths in raising their voices and fighting for their needs and rights.