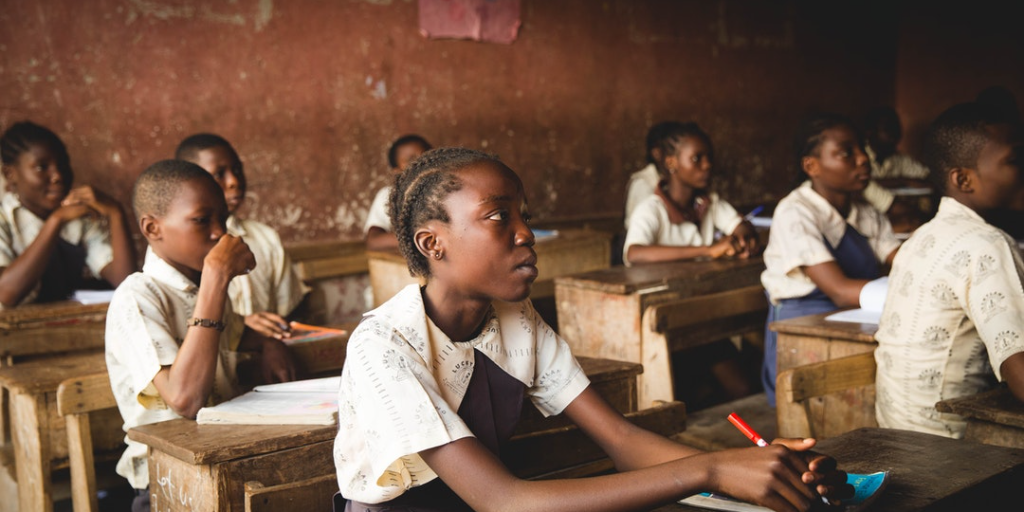 With the rising death toll in Syria, the school shootings in the USA, the violence in Myanmar, the heart-breaking Humanitarian Crisis in the Central African Republic and the Boko Haram Crisis in the Lake Chad Basin, it is easy to get lost in the general fracas of current events.

Unfortunately, we eventually develop a thick skin and become indifferent to the ills plaguing our society. However, no matter how tempting it is to put our earphones on, ignore these issues, and go on with our lives, as young people it is imperative that we do the best we can by creating awareness and informing policy to create a just world. We have to do our part even if our governments constantly disappoint us. We have to maintain a healthy dose of anger to serve as a reminder of the job we have to do otherwise we become apathetic.

That is why when the Government of Nigeria tries to minimize the kidnapping of over a hundred girls by Boko Haram gunmen from a boarding school in Dapchi, Yobe State as reported by BBC News, we need to sound alarms, hold the government accountable and make sure these girls are safely reunited with their families. The Nigerian government initially claims there are no missing girls and later claims some of them have been rescued by the military. Though they later apologize for what they call “erroneous statements”, this goes a long way to show how irresponsible some of our governments still are in 2018 and why there is a need for us young people to actively engage in the development processes of our countries.

Stories like the above are so common that many people basically swipe on to the next news story. Sadly, this new incident of kidnapping comes at a time when Nigeria has not fully recovered from the 2014 abduction of 270 schoolgirls in Chibok. A case which led to the “Bring Back Our Girls” movement. A case which drew international outrage and global attention to the Boko Haram Insurgency but did not do enough to bolster efforts to put an end to the crisis.  These events are not unique to Nigeria. Countries like Cameroon, Chad, and Niger have suffered similar fates where millions of people have been displaced, thousands killed and hundreds abducted. Like most conflict situations around the world, women and children suffer most with girls as young as 7 years old strapped with bombs and used as suicide bombers by Boko Haram. These terrorists have continued to conduct raids, raze entire towns and villages to the ground as well as destroy entire communities as I write.

The Boko Haram insurgency unlike more talked about crises like ISIS has not been accorded the same importance even though it ranked ahead of ISIS as the deadliest terrorist group in the world in 2015, 2016 and continues to leave a trail of chaos in 2018 like the recent abductions. Though local and international authorities have put in place measures to curb the spread of Boko Haram’s influence, the group has continued to find ways to prevail. Delegations from the U.N. Security Council have visited the region to see first-hand the negative effects Boko Haram has had on the population there. Military, financial and humanitarian assistance has been given to the governments of the countries affected and though these have helped in the fight against Boko Haram, these efforts have failed to mitigate the crisis.

Regrettably, Boko Haram is changing. The group is adapting to the current military assault technics implemented by governments and excelling brilliantly leaving many scholars baffled. Despite the constant onslaught on Boko Haram’s strongholds, they seem to always have reinforcements. Then we make the sad realization that though Boko Haram recruits new militants through abductions and intimidation, many young people join the ranks of Boko Haram without any coercion.

Engaging in violence and violent extremism is not only an affront to the respect for human rights and fundamental freedoms but an escalating threat to societies. Basically, when there is a group of complex factors with negative connotations especially where young people are involved, these youth become victims of radicalization.

Interestingly, the environments in which we find ourselves as young people influence the decisions we make and these decisions result in either positive or negative outcome. That is why it is very important to discuss why young people engage in violence and violent extremism in our communities; why young people continue to join the ranks of Boko Haram, and how we can ensure that young people have the opportunity to choose alternatives to violence. This means revisiting government’s counterterrorism and counter radicalism efforts. It means ensuring that concrete steps are taken to effectively eradicate the youth radicalization process before the situation escalates into unmanageable proportions. This is simply because most efforts have been geared towards targeting the effects of the insurgency while ignoring the drivers of the conflict. Drivers such as why communities and young people, in particular, continue to join the ranks of Boko Haram.

Why is Boko Haram Succeeding?

Cameroonian leaders and leaders around the world are looking for solutions to curb the increasing youth involvement in violence and violent extremism. But instead of concentrating on the causes of their involvement, they concentrate more on the effects and outcomes of their participation.

Some of the most prevailing factors why young people join the ranks of Boko Haram and why Boko Haram will continue to wax strong are Youth vulnerability, unemployment, and poverty. According to the Commonwealth Youth Development Index 2015 Nigeria and Cameroon, countries where Boko Haram is very active have employment and opportunity percentages of only 0.419% and 0.538% respectively. These are shockingly low for countries with over 65% of young people. These statistics are reflective of the other countries affected by Boko Haram in the Lake Chad Basin. With no means to fend for themselves and their families, many young people fall prey to the promises of a livelihood offered Boko Haram.

Secondly, Injustice, Youth exclusion from decision making, and bad governance are crucial factors which drive young people towards violence and violent extremism.  According to a recent ranking of members of Single and lower houses of parliament in 126 countries by the Inter-Parliamentary Union 2016, Cameroon, Chad, and Nigeria were ranked 88th at 0.0% while Niger was ranked 55th at 1.8%.  This evidence of youth exclusion coupled with high levels of corruption and injustice which characterize the governance processes of these countries push young people to look for alternatives for survival, such as joining the ranks of Boko Haram.

When Young people feel marginalized, ignored and abandoned, the smallest show of attention or sympathy sparks their interest. This is where the negative influence of extremist groups and religious ideologues step in. Extremist preachers who often distort religious injunctions and religious teachings prey on the ignorance and vulnerability of youths who become susceptible to recruitment. This usually develops into a psychological process where ordinary law-abiding youth become so aggrieved that they are willing to sacrifice their lives and the lives of innocent civilians to prove that they are worthy of whatever religious reward they have been promised. This is one of the reasons why many young people in the Boko Haram affected areas willingly join the ranks of the terrorist group Boko Haram. Though an Exact number of young people who have been influenced in this manner is not known, evidence from the emptied out Border towns in the Lake Chad basin speaks for itself.

We need to Change the Narrative

Young people are agents of change and if given the opportunity, they can use their tremendous abilities to counter extremism. Our governments need to offer credible alternatives to violent extremism, including counter-narratives and opportunities for mobilization, such as providing platforms for democratic participation, civic engagement, access to health and social services and employment opportunities for youth. Governments have the primary responsibility to liaise with actors, such as the police, teachers and social workers to ensure that young people’s needs are catered to adequately. Consequently, young people will be able to build resistance to extremist doctrines and will effectively spearhead the fight against Boko Haram and extremism as a whole. Many youth lead organizations are doing amazing jobs in this regard. The Local Youth Corner, Cameroon recently published the Youth Positive Practice Memoire on Rehabilitation and Reintegration in Cameroon: Transforming Violent Offenders into Champions of Peace. A Memoir which seeks to promote more youth engagement in preventing and countering violent extremism in Cameroon. In Nigeria, the CANVASSITY Pan African Youth Democracy program builds young people into leaders of tomorrow. Governments need to partner with young people to effect change.

Secondly, Koranic schools and religious authorities are the keys to deconstructing extremist doctrines and ideologies. According to Jihad Watch and the Combating Terrorism Center, many Koranic schools and mosques have been used as hunting grounds for prospective recruits. Religious authorities should debunk myths which promote extremism and ensure that the right message is passed to scholars. In this way peace becomes the watchword, subverting the plans of extremists. Governments must partner with religious authorities to ensure that Boko Haram extremists do not use religion and the vulnerability of youth to recruit new militants for their cause. Thirdly, governments must cooperate with each other especially in terms of effective border control, joint military operations and, most importantly, information gathering and sharing. To prevent Boko Haram from gaining more territory and expanding further, governments must orchestrate a more effective military response with a much-bolstered force. However, this would be impossible without essential leadership from the center, without tough calls and effective management. There must be strong leadership and guidance from leaders.

The international community and other stakeholders in the fight against global terrorism and extremism must engage governments and civil society organizations to support a broader sharing of good practices and lessons learned in the field of countering extremism. On the other hand, Civil Society organizations must undertake further research on youth radicalization, including taking into account the different perceptions and attitudes young people have towards extremism. This research will help government when they develop policy.

Are you a Victim of Boko Haram? Reach out and we can discuss your story.