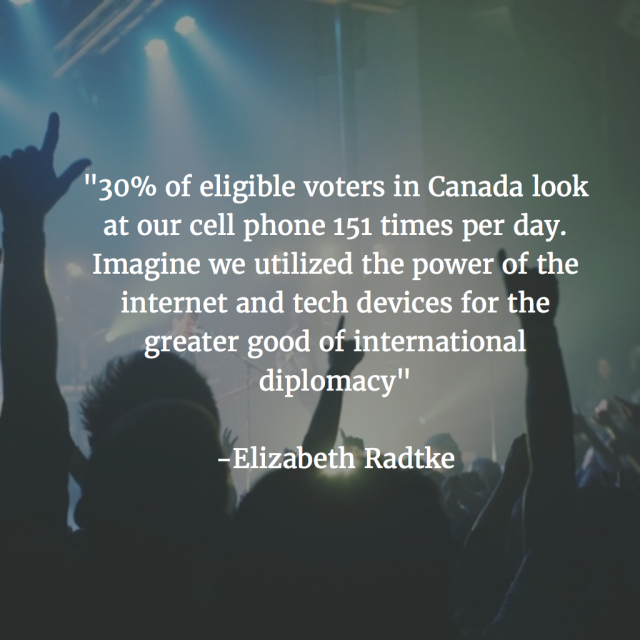 When I think about diplomacy, I picture a room filled with stuffy old white men discussing the future of country X in relation with country Y, while sipping on some nice 40 year old oak-aged scotch. Not exactly an inclusive or relatable picture right?

Now picture this situation again (perhaps minus the old white men and scotch), but add technology. Obama in DC, Trudeau in Ottawa, and Merkel in Germany could talk international diplomacy on Google Hangouts. President Modi could hold an online consultation and bring urban and rural communities together. Pretty damn revolutionary.

The U.S., a leader in the idea of Digital Diplomacy, has defined the idea as “the complementing of traditional foreign policy tools with newly innovated and adapted instruments of statecraft that fully leverages the networks, technologies, and demographics of our interconnected world.” The US State Department embraced the concept at the beginning of the 21st Century, and utilized YouTube, and other social media sites to reach the public. According to Hillary Clinton, “we’re working to leverage the power and potential in what I call 21st century statecraft. Part of our approach is to embrace new tools, like using cell phones for mobile banking or to monitor elections. But we’re also reaching to the people behind these tools, the innovators and entrepreneurs themselves.”  The efforts by the U.S. State Department has led to over 230 governmental Facebook pages, 80 Twitter accounts, 55 channels on YouTube and 40 accounts on Flickr. The U.K. is also at the forefront of e-diplomacy, with The UK Foreign and Commonwealth Office instating an Office of Digital Diplomacy. Luckily, Canada is starting to follow suit.

Under the direction of former Minister of Foreign Affairs John Baird, Global Affairs Canada (GAC) began having an online presence a few years back. Today, GAC’s social media accounts have a strong international reach, garnering over 3 million likes/followers across Facebook and Twitter alone. The birth of GAC’s Digital Diplomacy section saw the creation of a “direct diplomacy” project run by the University of Toronto’s Munk School of Global Affairs. The project, called the Global Dialogue on the Future of Iran, sought to open up digital communications between Canada and Iran, a country defined by its repressive and dictatorial stronghold on any communicative channels. The next phase of the project developed into what is now the Munk School of Global Affair’s Digital Public Square, an online community meant to engage actors from all countries and spark debate on international affairs.

While the new the Liberal government has focused on openness as a principle for all government action, they need to prioritize continuing the advancement of the digitization of GAC, and all communication in international relations. The reach the Government could have if they expanded this program, and partnered with the Digital Public Square, is immeasurable. The basis behind a liberal democracy is to advance freedoms of individuals all across the globe. By pushing for the advancement of digital diplomacy, the Liberal Government would certainly fulfill this definition.

As an employee of a Minister of the Cabinet of the Government of Canada, I get to attend some pretty cool seminars and presentations. The other week I had the pleasure of sitting in on a presentation run by Google Canada called “Google for Government”. While I have always been attracted by the idea of opening up communication lines in Canadian Government, this presentation really made me realize how plausible this idea really is.

30% of eligible voters in Canada look at our cell phone 151 times per day. We are the tech era. We are constantly and unequivocally connected to our devices, and rely on them each and every day. Imagine we utilized the power of the internet and tech devices for the greater good of international diplomacy.

Canadian leaders are already stepping up and starting this new movement. Public Services and Procurement Canada just launched an online public consultation process for Canada Post, Rona Ambrose – leader of the official opposition – has held Q&A sessions using Google Hangouts, and Prime Minister Justin Trudeau just recently aired the rising of the pride flag on Parliament Hill on Facebook live. My office and I are currently organizing a Google Hangout between two Ministers, a constituent and an Indigenous band leader; I am certainly looking forward to seeing how this discussion goes (very cool!!!).

Social media sites such as Facebook, Twitter, Instagram and YouTube hold unmatched power in today’s world. While world leaders have been dominating these sites for years, can we utilize social media to delve into greater problems of the world? Take Google Hangouts for example.  Digital diplomacy can be facilitated through using Google Air hangouts. This efficient way of connecting people could bring leaders from every sector and every corner of the globe together to discuss international affairs. An environmentally friendly idea, we would no longer have to unnecessarily fly people from one end of the world to the other. Skype already live translates Spanish into English and vice versa. This concept of digital live translation could continue to grow in order to create (referring to skype live translator? Skype now live translate Spanish into English and vice versa…imagine the impact on the UN and other orgs….cool stuff eh!) more accessible technologies, making it easy for people coming from any background, with any disability, to participate.

By broadcasting these Hangouts live on YouTube or Facebook, we would be opening up diplomacy to everyone.  With people twice as likely to remember things they view on YouTube than on TV, people would pay attention. In addition, we could use Google Analytics to research how, why, and when people are most engaged in these discussions. By connecting diplomacy to Google Alerts or Google Trends, we could notify people when there are updates to hot button issues (for example the Doctor Assisted Dying legislation in Canada).

Digital Diplomacy goes beyond Facebook, YouTube or Google; it’s about creating a cyber-community that will delve into deep topics and solve diplomatic problems (well said).  Digital Diplomacy has the potential to revolutionize international affairs. Cyber diplomacy could connect urban and rural populations, and it could connect marginalized and historically oppressed people to decision makers and legislators.

But let’s roll up our sleeves for a minute. I digress in saying cyber diplomacy is a flawless way of connecting the masses. Before we can all get overly excited about the idea, we certainly need to see changes in our current governmental bodies.

We need to reform, update and strengthen IT capabilities with government. As a past student with Statistics Canada, I remember a presentation on GC Docs – the Government of Canada’s version of Google Docs. All well and nice. However, due to security restrictions and bureaucratic tape, GC Docs won’t be up and running until 2018 by the earliest. By 2018, Google Docs will have a completely different operating system itself! Confidentiality of data is a huge barrier to the success of e-diplomacy. While Google Air Hangouts are clearly a great way to connect global leaders, we cannot – as of yet – guarantee confidentiality of data transmitted and files transferred. In addition to security, governments need to create a singular operating system for transmitting files. Until recently, the US State Department had been saddled with four separate internal communications networks, none of which were compatible with each other.

Second, we have to be much more focused on the outcome and watch what we actually deliver. By focusing more on cultivating our networks, and less on the hierarchical structure of government organizations, we will be able to overcome the potential of bureaucratic tape stopping the progress of modernizing diplomacy. Creating these deliverables within our bureaucratic framework may be a recipe for disasters. Most public servants are accustomed to the old way of doing businesses, with the average age of a public servant in Canada at 45 years (50+ for executives) (could enter the average age of a public servant in Canada, I think it’s 46? Find the number would help solidify your point) . Mentality of those involved in this switch is a huge contributing factor to potential success. Even if people were to be encouraged and empowered to make the change the e-diplomacy, would it even be truly effective? Our beloved “twitter trolls” would certainly falsify our hope for positive and lasting change.

Finally, we need to focus on providing high speed and reliable internet to rural and impoverished communities. Even in Ontario there are remote communities that simply do not have the internet capabilities to host Google hangouts, or participate in online consultations. Luckily, some political decisions in the West have helped to foster opportunities for poorer countries and communities to jump the digital divide and start to see internet capabilities in their communities. This is probably the biggest barrier to the success of digital diplomacy – especially if we want to focus on the inclusion of all populations in decision making processes.

At home, Google Canada needs to step up and offer its services to every bureaucratic body. We are beginning to see incubators and hubs for innovations and technology; which is a huge step towards creating a mindset of digital diplomacy. Abroad, we should help organizations like the Digital Diplomacy Coalition grow and gain recognition. By founding more organizations designed to bring together the diplomatic, international affairs and tech groups in their region, we can start to make digital diplomacy mainstream.

The only way we can break our current, archaic and traditional mold of diplomacy is by bringing it into the future. Digital diplomacy is the new era of diplomatic relations. Bringing diplomacy to the internet of things, and making it online and accessible is the only way we will modernize our state of international affairs.