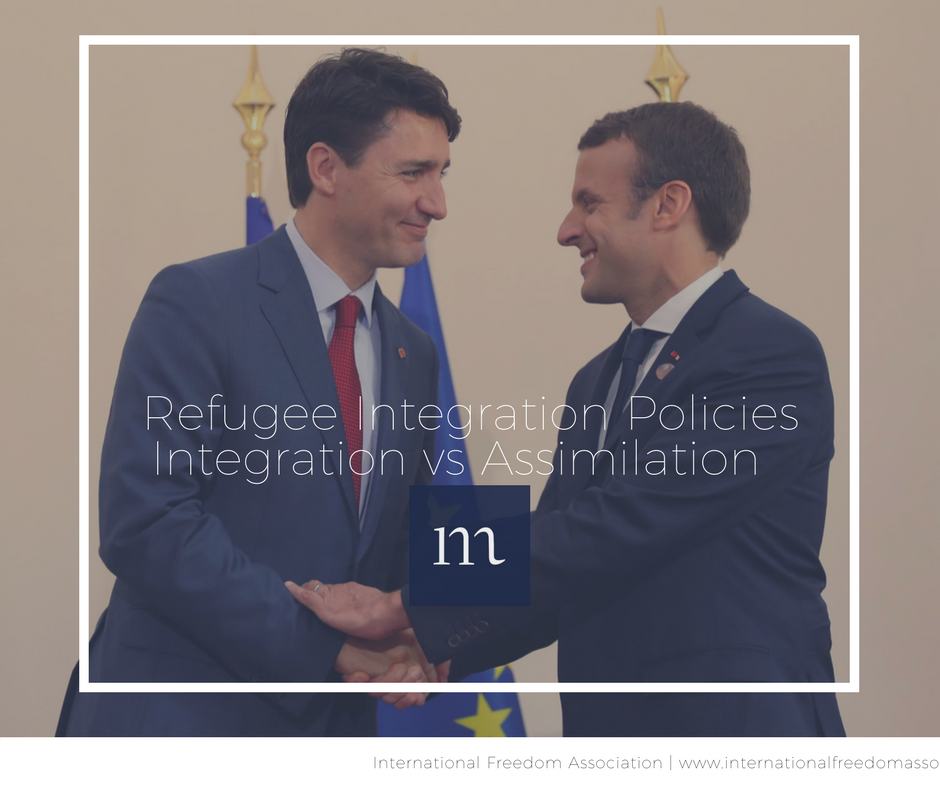 A few weeks ago, I attended a talk by Mr. Filippo Grandi, who is currently the United Nations High Commissioner for Refugees. In a time where the modern human condition seems to be plagued by hatred of migrants and fear of refugees, Grandi stood steadfast in support of aid for those fleeing persecution and war. However, he mentioned something else that quite surprised me: that Canada has been doing a phenomenal job in integrating refugees.

As a proud Canadian and someone who has worked for the Government of Canada before, I smiled happily at his comment, and was struck that the most influential man in the world of humanitarian refugee aid looks to Canada for inspiration. However, his comment stirred some curiosity in me: is Canada really a promise land for refugees, especially when comparing it to my current residence of France?

While last year, Canada fulfilled its promise of taking in 35,000 Syrian refugees, it seems as though Canada is not acting as a promise land in terms of properly integrating refugees within society. Moreover, Canada is only continuing to slip down the scale of the Migrant Integration Policy Index.

Why is integration important? Imagine being torn from your country of origin due to persecution, moving to a completely foreign place – where the language, culture and geography is unknown to you – and being forced to remain on your own in this new land. Lack of migrant integration into a host country can be extremely dangerous. When I was working for the UNHCR in Cape Town two years ago, I saw first hand the repercussions of such lack of policies. Refugees coming from the Democratic Republic of Congo and Somalia were forced to stay within their own communities, causing turmoil and violence to spark between the two communities, and xenophobic attacks to become the new norm.

This is indeed a defining reason why clear integration policies are so important for host countries. According to a 2004 report of York University on Newcomer Integration Policies in Canada, there are two important elements in integrating migrants into Canada. First, there must be a reciprocal obligation of both the host country and the newcomer in adapting to a shift in culture, community and history. Second, policies must be delegated through various levels of government and the non-governmental sector, in order to alleviate pressures from the federal level of leadership, and ensure all newcomers receive necessary services on a holistic level.

Over the past decade, Canada was doing quite well in integrating newcomers and refugees. According to the Globe and Mail, Canada’s integration policies were ranked in the top tier of the world (2011 survey). With its newly recognized family reunification program, in addition to the Government’s efforts in accrediting the education and professional experiences of migrants, Canada was on the path to creating a seamless approach to integration of refugees and migrants. And, the world seemed to be noticing. As The Guardian reports, “when political parties across the world complain about their own country’s ‘inefficient’ way of coping with immigration, they frequently refer to us in Canada.”

So, what happened? Why has Canada suddenly slipped down the point-ranking system of refugee integration? The Migrant Integration Policy Index (MIPEX), the world’s largest and most recognized organization that measures national integration policies, now reports that Canadian policies have significantly changed, causing a land of once-equal opportunities to become a land of questionable opportunities. Falling from 3rd to 6th place, “Canada has actually undergone several small restrictions in recent years that all together sent Canada in the opposite direction.” As The Star corroborates, Canada has rolled back on some of the family reunification provisions, causing migrants to lack market mobility, fall behind on education, and altogether avoid political participation. In fact, political participation of migrants is one indicator where Canada needs to drastically improve. How can the voices of migrants and refugees be heard when they are not properly represented in Government? However, I would argue that the current Canadian Government is trying to better integrate migrants into federal politics, with the recent elections and appointments of an Afghan-refugee as the Minister for the Status of Women, and Somali-born Ahmed Hussen as Minister of Citizenship and Immigration. 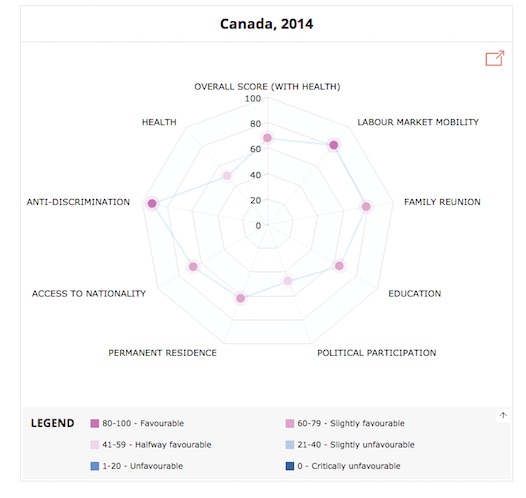 It is imperative to mention that the tides of Canadian popular support of migrant intake may be changing. In a current global order marred by increased protectionism and anti-refugee policies, it seems as though Canadians may be swayed by this rhetoric. According to a recent CBC article, 1 in 4 Canadians want a Trump-style travel ban. While this survey raises a whole slew of questions and problems, it is undeniable that if popular support in Canada of migrants sways in the opposite direction, it will negatively impact integration policies.

While Filippo Grandi gave an undeniable shout-out to Canada during his speech, it was hard to forget that he was presenting his speech in a country that historically is one of Europe’s oldest countries of immigration. Under Holland’s leadership, France – alongside Germany – has been, without question, accepting thousands of Middle Eastern migrants and refugees over the past several years. In Paris alone, dozens of refugee intake centers and camps exist, only growing in number since the Syrian war. It is important to remember however, that France is at a significant disadvantage compared to Canada. Alongside other continental European states, France has no choice but to welcome refugees crossing its borders; whereas Canada has the authority to accept or deny refugees, as they must travel across the Atlantic to reach their new home. This disadvantage has significantly affected the ability of France to integrate its migrants.

Indeed, France’s ranking of 17th in the world in terms of migrant integration policy shows in the country’s inability to integrate migrants into the labour markets, uphold family reunification promises, and get migrants involved in the democratic process. Especially seeing as integration initiatives in France are limited to a newcomer’s first five years in the country, it is hard to create an environment of social cohesion, particularly amongst youth. However, France’s low rankings on the MIPEX scale stems not from its weak integration policies, but rather from the country’s overall ideology of assimilation over integration. The country’s controversial, albeit now cemented, policy of banning headscarves in schools and niqabs in public, has deeply influenced the ability of migrants to integrate into French society. As the HuffPost argues, the ideology of the French Government is that migrants must come to France, act French, and thereby be French. This ideal is at complete odds with the Canadian approach. While it is unarguable that Canada’s integration policies have weakened over the past few years, Canadians pride themselves on allowing all migrants to pursue the right to religious freedom. 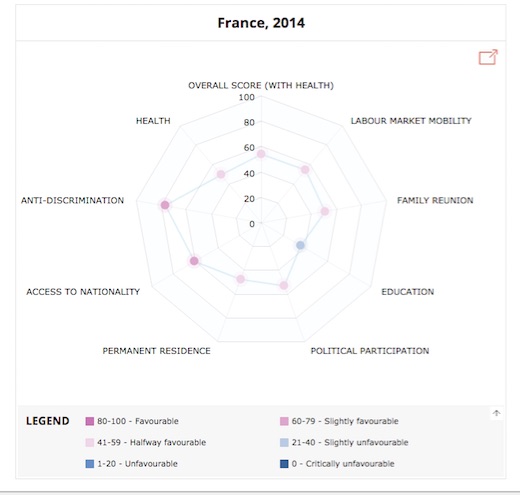 Is this ideology also not at odds with France’s foundation of “liberté, fraternité et egalité”? Assimilation of migrants binds groups of individuals together that are in fact very different. Assimilation promotes an atmosphere of cultural homogeneity, even though cultures differ greatly around the world. Why doesn’t France want to celebrate diversity by accepting differences, rather than shoving everyone into the same box?

However, my question becomes marred in complexity once we take a look at recent terrorist attacks in France. Just two weeks ago did a knife yielding assailant attack guards at the Louvre. I myself got caught on the metro on my way to school due to this attack. When a country is constantly on edge in fear of another attack – and worried it will be more grave than the last – policies tend to be created out of angst and fear, rather than evidence and empirics.

While the future of refugees in France – viewed in the lens of recent terrorist acts – far outpace the scope of my analysis – I do want to briefly touch on how, perhaps, we can better integrate migrants and refugees in both Canada and France.

The Nexus: Technology and Integration

We now see that Canada and France are two very different countries when it comes to policies surrounding refugee integration; however, I believe they can both benefit greatly if they were to use technology to better integrate refugees. Technology is already at the helm of helping refugees flee conflict and persecution. Many Syrian refugees relied heavily on their smartphone’s GPS to safely cross the Mediterranean waters and seek safety in Europe. In fact, over 85% of Syrian refugees have smartphones. If we were to harness the power of technology while integrating migrants into host countries, I believe the effects would be surprising.

This concept of digital humanitarianism, coined by the Migration Policy Institute, would create collaborations between refugees and migrants, civil society, professional organizations and education institutions. For instance, by creating phone apps that connect newcomers to goods and services, it would help refugees navigate the complexities of a new society. Services taken for granted by national citizens – such as healthcare, emergency and legal services – are not easily navigable by newcomers, thus making service apps almost a necessity in a world of technology. The Refugee AID App does just this: acts as a “single point for refugees to find information and for NGO’s to provide it.” An app having received wide accolades and success, it has already partnered with organizations such as The Red Cross, Medecins Sans Frontières and Save the Children.

The Migration Policy Institute also argues that technology would help refugees find work and/or training, in addition to providing access to low income housing and coop communities. The first is incredibly important; especially seeing as immediate access to the labour market and labour market mobility is the top MIPEX indicator. Introducing apps that connect refugees and newcomers to job opportunities in their field is an incredibly important step in contributing to the improvement of refugee integration policies. Entrepreneurial Refugees does just this, by connecting newcomers to local entrepreneurs in order to develop their business ideas. However, I would argue more applications and tools should be created to promote business development and innovation amongst refugees. Alongside this, Government funding, grants and resources should be available specifically targeted at refugee business creation. While there are Government of Canada resources that provides funding to innovative business solutions, such as Concierge, the Government should create grants specifically targeted at refugee innovation. This would not only promote business development within the community, but incentivize newcomers to self-integrating.

The idea of self-integration takes my argumentation back to the beginning of this article, where I mentioned that the onus of newcomer integration must be borne by both the refugee and the host Government. Using technology to spark business development in the refugee community would achieve this exact ideal of integration. It would also quell France’s current problem of assimilating refugees, rather than integrating them. I would also argue that digital humanitarianism may also allow refugees to focus their start-ups within the context of their culture, thereby garnering a greater community understanding of their country of origin, history and culture. When the host country is better able to understand a newcomers’ original culture, they will be more apt to accept it, rather than suppress it within their own cultures. I could see this helping to transition integration policies from assimilation to integration – a necessary step in improving the lives of refugees everywhere.

Both Options are Not Easy

However, the future certainly remains unclear, particularly in France. Although France elected Macron over Marine Le Pen – the very future of refugee intake in France is still in question. Should President Macron overhaul refugee acceptance policy, then arguing for better integration of newcomers may not become a priority.

Regardless, for countries such as Canada who have a clear cut refugee acceptance program, we need to accept the concept of digital humanitarianism, and by using technology, help the most vulnerable in the world become fully integrated members of their new home.