From developed to developing

The economy of the United States, right now, resembles more a developing country than it does the ‘land of opportunity’ often presented.  Since the first decoupling of wages from worker productivity in the early 1970s we have seen the economy of the US gradually divide into two separate spheres that rarely interact in a meaningful way.  In one sphere are the high-income economy (HIE) members who experience an America of opportunity and promise, in the other are the low-income economy (LIE) members who live in an America of limitations characterised by stagnation and debt.

While recent discussions of inequality in the United States have focussed principally on the differences in incomes within society, what has begun to occur in the US, and to some extent in other developed countries, goes beyond pure income dynamics and pushes into the realm of differences in opportunity. The economist Peter Temin was one of the first to formally describe this dual nature of the US economy in a recent working paper and a book published last year.  In that paper and later book he described the situation using a model developed by the Nobel laureate W. Arthur Lewis to analyse the divergent forces in developing economies.  The fact that this model can be successfully applied in the American context should give pause to US policy makers.

The characteristics of the dual economy in the US are those we often associate with inequality, but there is a more pernicious aspect to it as well that manifests as a difference in opportunity.  The two economic spheres of American society now have fundamentally distinct financial, residential, and educational systems with little cross-over between them.  For those who come from poor families with lower-income parents, the American dream is arguably dead; those from the upper echelon of society with higher-income families have a wider range of educational, career, family, and life choices open to them. 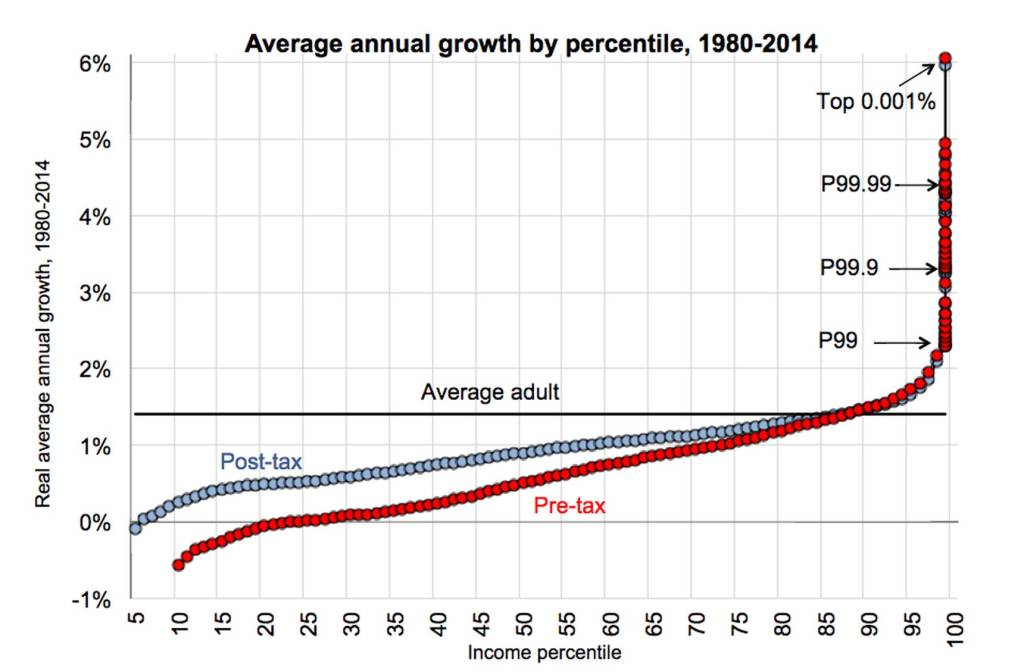 The members of the HIE sector live in prosperous neighbourhoods and have access to good schools.  When they choose to live outside of these neighbourhoods, they are the vanguard of gentrification and maintain educational attainment with cross-boundary schooling or sending their kids to private schools.  They have easy access to healthcare, both in terms of insurance coverage and physical access to medical professionals.  They and their kids do well in school, and when they don’t they have access to enrichment and tutoring services to help them along. Afterwards, they go to college and gain relatively secure employment with a salary and benefits that perpetuate the system.

The LIE group, in contrast, have irregular and poorly-paid employment, they live in undesirable neighbourhoods with schools that lack the capacity to help students succeed, and they lack access to basic necessities such as grocery stores and health services.  They struggle to pay for basic living expenses and often take on onerous debt obligations with ruinous interest rates in a financial system comprised of small lending institutions and payday loans.  Members of this group lack the security and safety provided to those in the HIE sector and often perform poorly in school and have significantly lower life expectancy. 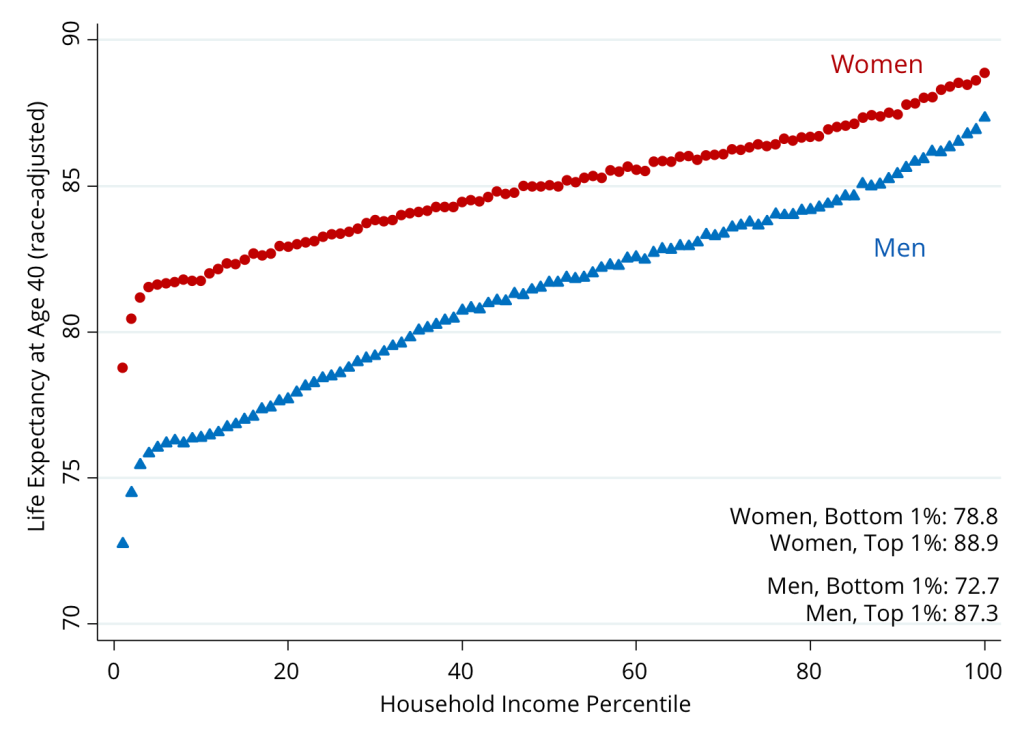 The only way to move from the LIE group to the HIE group and shift out of its effective poverty trap is through education, and a bit of luck.  Receiving a college education moves people into the 30% of Americans with post-secondary training and opens up opportunities for employment in jobs that can boost them into the HIE sector.  Though this is not a guarantee.  As with the Lewis model of industrialising economies where poor rural workers move to cities in an attempt to find jobs with higher wages, LIE people may not succeed in making the transition.  The myriad road-blocks to attaining university education do not help this situation. 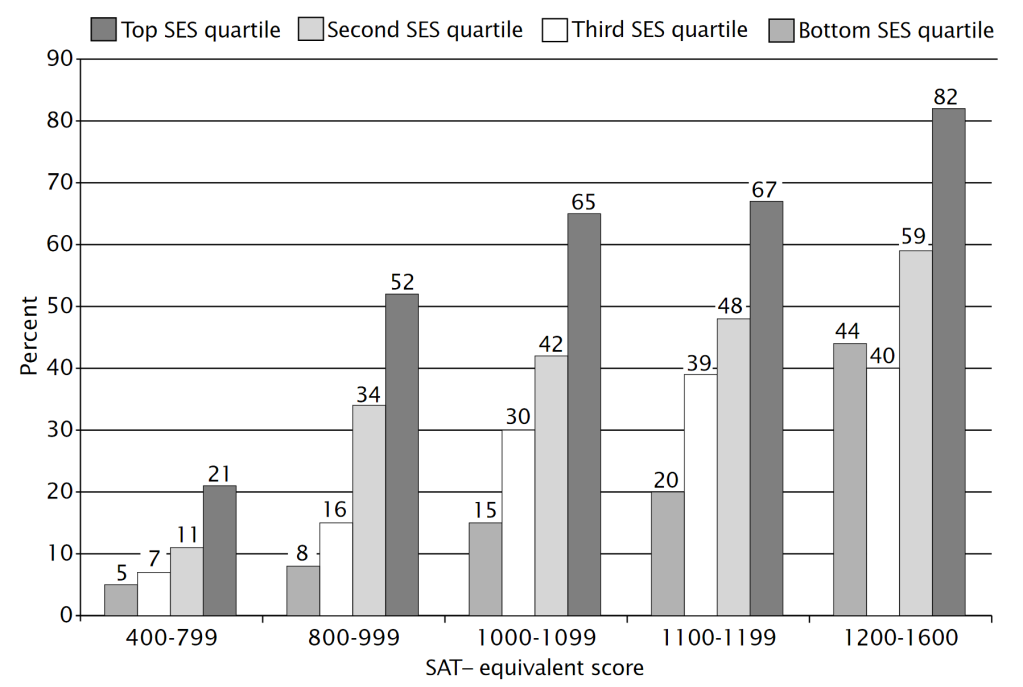 Source:  “How Increasing College Access Is Increasing Inequality and What to Do about It” by Anthony Carnevale and Jeff Strohl

The United States is currently characterised by an economic structure that resembles the dual economy of a developing nation and has a political system to match.  Members of the LIE sector have little policy influence and lack access to impact the political process.  Where HIE people make up the majority of legislators in America and can finance and lobby those same legislators, members of the LIE group only access the political system every other November, if they vote.  This asymmetry in political power speaks to how this dual economy emerged and is currently sustained in what is often termed the richest nation in the world.  Members of the high-wage economy can act; members of the low-wage economy must react.

A road paved with bad intentions

The process of the splitting of the American economy into two distinct pieces began in the early 1970s with the decoupling of wages from productivity. This was a phenomenon that can be traced back to the beginning of the Nixon administration and corresponds to the stagnation of wage growth despite US workers becoming more productive. Since this decoupling, wages in the United States have significantly lagged behind growth while the cost of living has increased, meaning that not only are wage-workers not receiving their fair share for work done, but they are being made effectively poorer than their forebears.

Wages and income are far from the whole story.  This period coincided with significant policy changes by the US government that would begin to build the hurdles currently in place that would help to prevent LIE people from transitioning to the HIE sector.  By hollowing out the welfare system and undermining the education system, members of the LIE sector faced increasing difficulty in gaining education – the key to successful movement into the HIE sector.

The desire of poor southern whites to keep African Americans marginalised after desegregation was exploited to foster support for tough-on-crime agendas and increasing welfare restrictions.  By painting poor black Americans as the primary perpetrators of crime and the principal beneficiaries of social assistance, policy makers were able to implement policies tacitly assumed to marginalise one segment of society while actually undermining the entire base of the unified US economy.  The War on Drugs was extremely effective at not only disenfranchising and stigmatising African Americans but also undermining home and school life for millions.  This effort, coupled with redlining policies and slashing government services, has kept wealth out of the hands of African Americans and destroyed their opportunities for social mobility.  The effects of these policies are not, however, limited to black Americans; the secondary impact of these types of policies has been to completely undermine the social safety net in the United States for everyone.  This has completely hollowed out low-income areas, depleting their services, infrastructure, and opportunities and creating a system where members of the LIE sector are at a fundamental disadvantage.

Policies that help the members of the HIE sector at the expense of the LIE sector continue to be implemented.  As recently as the 2008 financial crisis, the economic bailout provided by the government and the Federal Reserve worked to alleviate the damage caused to asset holders, not those actually holding the subprime mortgages. Money was effectively transferred from insolvent members of the LIE sector to investors from the HIE sector.  Similarly, the emphasis on punishing welfare cheats at the expense of providing actual assistance to those in need has grown to such an extent that it has crippled the very system it is claiming to protect.

What is to be done?

Removing barriers to education is the most important step in rectifying the situation and reuniting the US economy into a well-structured whole.  There is currently an inherent difference in access that means this driver of mobility is not easily available for people in the LIE sector.  The only way for individuals from the LIE sector to move into the HIE sector is through education and the prohibitive cost of this is a major hindrance to making this transition.  More importantly though is lower level education, increasing funding for primary and secondary schools is imperative since it doesn’t matter how much college education costs if students can’t make it into colleges in the first place.  The asymmetry in American school funding is a fundamental aspect of the dual economy, the LIE sector are resigned to poorly performing public school in low-funding areas while the HIE sector has the choice between what is probably a well-funded public school or private schools. Rectifying this disparity between educational districts would go a long way to increasing the mobility of the LIE population.  Other anti-inequality measures such as health care funding and improved infrastructure would assist in making the lives of those in the LIE sector easier and prevent physical barriers from impeding their progress.

Finding and electing politicians looking to change these policies is the most important part.  Without policy makers in congress who are actively attempting to recouple the American economy, none of this can be implemented and the biggest obstacle to this is the latent racism of US policy discussions.  Poor whites are being pitted against their neighbours in the LIE sector through the exploitation of institutional racism in American society. Tackling the entrenched societal racism in the United States must come before any gains against the dual economy can truly be made.  So long as there exists a strong desire to marginalise one segment of society and so long as this desire is permissible in society at large there is no way to reverse the pernicious policies designed to undermine the very structure of an equal society in the United States.

The economy of the United States is no longer one economy, but two.  Those in the high-income economy have opportunities and support that was at one time the hallmark of the American dream while those in the low-income economy have limited opportunities and significant barriers to mobility.  This state of affairs is generally unsustainable and should be undesirable. The idea of social mobility and the ability to better one’s condition should be something shared by all members of society and while it is difficult to fully break the self-perpetuating cycles of wealth and poverty, efforts can and should be made to assist in transitioning people upwards.  Pernicious policies acted to undermine the US social system and created a division in the social economy of the country that can only now be bridged with immense difficulty.  Efforts to decrease income inequality and combatting entrenched and socialised racism will go a long way to helping recouple the dual economies of the United States.