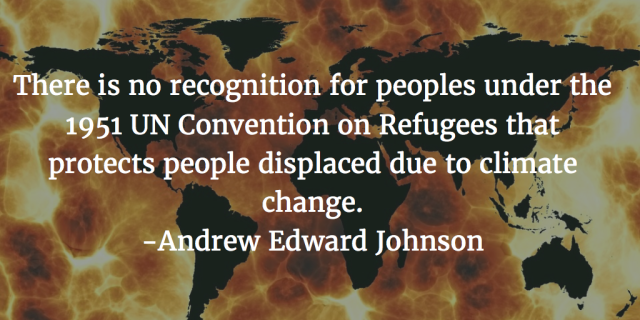 A few months ago I attended a NATO security forum in Kyiv, Ukraine. The discussion surrounded security threats the globe faces in the 21st century and although climate change is seen as the security threat, it is the human security related to climate change that is the real threat. What this means exactly is that people seeking refuge in other countries has the greatest potential for change. So I guess the young Maldivian man I befriended while studying abroad in Australia, the same young man I shared so many fond moments with, will hold a gun to my head in twenty years while his country deals with the adversities of rising sea-levels?

Not so fast, the threat is not that transparent.

Humans are a migratory species. Homo sapiens left Africa roughly 150,000 years ago, spread across Europe, Asia and Australia 40,000 ago, and came to the Americas 20,000 years ago. Hopefully you paid attention in human geography, however with the Syrian refugee crisis rocking the world and sparking socio-economic debate, it amazes me how xenophobic some groups have become.

I know lots of Canadians that may be shocked, Canada is generally very accepting of migrants. However, for many, xenophobia is not just a matter for individuals, but is engrained into the policies of governing political parties. Of course, there exist ideologies that are not respective of human rights, as well as extremist groups. Canada is one of the most respected countries; we are a country in which human rights are generally respected, there is freedom of religion, and a world-class education system that educates the populous to ask important questions and hold the government accountable. Although many believe refugees threaten our way of life, especially Donald Trump, the majority of Syrian refugees are looking for a better life in places like the United States, Canada, and Germany. At a certain point we need to remember that we all had to come from somewhere. Brexit is a perfect example of populist group using refugees as a way of instilling fear in the populations, and that succeeded.

My grandparents emigrated from Germany after the Second World War; they had lost everything and never thought Germany would rebuild. There have been instances where I have had to remind my grandfather that Canada welcomed them with open arms. On many occasions I have heard my grandfather express that if he had known how successful Germany would be in the proceeding decades, they would have stayed. Uncertainty is the greatest foe of the human mind. Humans have always migrated due to uncertainty, especially due to a changing climate or an inadequate supply of food.

There have been times in my career I have encountered xenophobic people questioning the government’s support of refugees, going as far as saying the acceptance of Syrian refugees is tearing a part the fabric of the nation. I use this anecdote because when I heard the gentlemen say these words, turned into a force not to be reckoned with. The fabric of Canada is made up of the world; our culture is the extremely diverse, not to mention welcoming. These type of people are kind that tells the Muslim woman on the Toronto subway to go back to where she came from only to be looked at with confusion considering her family has as lived in Toronto for two generations.

So we have identified there is an issue with xenophobia, man has an insatiable need to migrate due to uncertainty and that humans have been migrating for thousands of years. What if I were proposed to you that the refugee crisis the world is facing would never end? Hopefully you are an optimist, however having studied the science of climate change, I can say with some certainty that by 2050 will be 250 million displaced due to climate related systems, and that is a conservative number. The interesting part is that this includes displacement of people from major cities like Tokyo, New York and London. The globe is quickly encroaching the age in which the west is no longer safe, and there is limited room for us to run.

You might think that there is lots of room to run, and that I have already mentioned that humans have been doing so for thousands of years. Although humans are migratory creatures, we are also creatures of social constructs, including borders. Thousands of years ago if someone wanted to migrate they would not have to wait years to be screened, navigate confusing bureaucracy and likely would not worry about any walls or fences. Of course blindly navigating the globe and near death experiences with saber-toothed cats were the challenges of the days, I would prefer the thrills and adventures of pre-historic migration, to the bigotry, and hatred and intolerance migrants face today.

I do not have a perfect solution just yet, however what scares me is the lack of media attention on how real a threat climate migration is to human security. We have become obsessed with protecting borders and resources. Thousands of people flee conflict in Syria in the Mediterranean, in Australia people arrive on boats from Indonesia fleeing socio-economic crisis. What we need to be asking ourselves in North America is what do we do when boats are making the treacherous journey across the Atlantic, or worse, the Pacific? I would argue that free migration of people would help address the issue. Similar to free trade, free migration would have benefits on the economy and help the world to cope with a larger crisis in which migrants would need to fight for their life through global conflict.

Protectionist and nationalist would argue against free migration, however the benefits of free trade and free migration outweigh the losses. Climate change is and will continue to be expensive. There is going to need to come a time in which human’s obsession with our personal wealth is eradicated, because inaction will become more expensive than action. There will be personal sacrifice in terms of wealth, but the overall socio-economic benefit will be positive.

At current, there is no recognition for peoples under the 1951 UN Convention on Refugees that protects people displaced due to climate change. Countries often avoid this question, as it will only add to their never-ending immigration ministries. As someone with experience working for a Member of Parliament, I know firsthand that 60 percent of a constituency office’s time goes into immigration matters. The simple recognition of climate change refugees would increase the workload and would cost taxpayers more money. This may be an inevitable fact, so then there needs to be a positive to allowing these types of migrants to come into our country.

Climate change does not discriminate, which means that refugee policy cannot either. There will be millions of people displaced from highly skilled countries like the Netherlands as well. These would be the least of our concern. However, people from less developed countries are skilled too. An issue many in the migration field will tell you is that the transferability of skills is lacking. My friends mother is a doctor in Tajikistan, however it is taking her years to even become a nurse in Canada. Understandably the Tajik education system is not the same for doctors as the Canadians, but these people have experiences that are relatable so the amount of time they need to train is unreasonably long. Unfortunately it is the same within Canada as well. Transferability of skills between provinces is a lengthy process for many professions.

It may be time to start considering refugees as economic migrants, instead of people that drain countries resources. By breaking down borders and allowing for the free movement of people, there will be more cooperation. That’s why climate change could make for the driver behind the largest international relations project since the European Union. Of course the EU is having issues of their own at the moment, but it really is a testament of how the free movement of people can be beneficial.

When it comes to National Security, climate change truly is a major threat. Asides from the inevitable displacement of people, if countries do not start sharing resources more sustainably and fairly, there will be conflict. War over vital resources is not a new concept. With the mess the globe is currently facing with refugees, adding future wars over resources will only add to the socio-economic costs. Avoiding these conflicts is definitely an ideal situation, but in reality there are still many people that cannot grasp the concept of acceptance of people.

There is a moral aspect that humans need to tap into before climate refugees become a topic of conversation amongst the masses. Education is a great stepping-stone to creating greater tolerance and acceptance. Humans also need to increase exposure to other cultures. The challenges for refugees in the 21st century are frightening. The opportunity for reform on international policy related to refugees is needed, and a new way of thinking about migration lies within the migration patterns of humans past. The conversation needs to begin about the human security related to climate change. I try to speak to everyone I know about this, especially when I engage in conversations related to the current refugee crisis. Education is a powerful tool, and this is an issue that the populous needs to be educated on before it is too late.