In 2016, Wikileaks revealed that Sandy Newman, an associate of Hillary Clinton, wrote to John Podesta (Clinton’s presidential campaign manager) that there needed to be a “Catholic Spring, in which Catholics themselves demand the end of a Middle Ages dictatorship and the beginning of a little democracy and respect for gender equality in the Catholic Church”.

As a result of these revelations, fake news and conspiracy theory websites have claimed that Hillary Clinton, George Soros and Barack Obama orchestrated a revolution deep within the Vatican. According to this conspiracy theory, this powerful triad pulled their strings in order to remove conservative Pope Benedict XVI, and put in his place liberal Pope Francis.

Admittedly, Pope Benedict’s resignation was very strange, and in the history of the Papacy, this is not a normal procedure at all. But, it seems very clear that Benedict resigned out of his own will. He tried to excuse himself by arguing that he was just too tired, and he wanted to live a simpler life in the comfort of retirement. Some insiders have alleged that, despite being a conservative, he was frustrated with not being able to process some reforms, and as a result, he gave up.

Be that as it may, Benedict’s resignation played into the hands of the conspiratorial thinking that has been present within the Church, ever since the 19th Century. Some Catholic conservatives have always had the fear that the Church would be destroyed, not by a foreign force, but from within. Allegedly, some Masonic documents have been found (especially the Alta Vendita), in which Freemasons lay out the plan to infiltrate the Papacy, elect one of their own as Pope, and then modify doctrines, thus destroying the Church by turning it into a liberal monster.

Needless to say, this is all phantasy. The Alta Venditta is most likely a forgery; it may have even been been produced by Catholic insiders in order to attack Masonry, very much as the Protocols of the Elders of Zion was a forgery in order to attack Jews.

And of course, Pope Francis’ election had nothing to do with Soros, Obama or Clinton. But, even if these powerful figures did have some influence on the election of the current Pope, is it really objectionable? Is there no need for a Catholic spring? In order to be just and morally commendable, revolutions (or so-called “springs”) do not need to arise entirely from within. The American Revolution had Spanish and French support. The Latin American Revolutions had English support. The Russian Revolution had German support. Does that imply that those revolutions were illegitimate? Of course not. Foreign powers can justifiably take steps so that, within despotic States or institutions, changes for the better may begin to happen. John Paul II himself was accused of accelerating the internal collapse of Communism. He certainly did so, but in the long term, he has actually been commended for it.

Catholic conspiracy theorists make much of Sandy Newman’s use of the term “Catholic Spring”. After all, the original “springs” in the Arab world, have turned out to be very cold winters. At least, so the arguments go, Arab dictators provided stability. Once they were removed (and, it is beyond doubt that Obama and the liberal ruling elite in the US pulled the plug off in many cases), chaos and civil wars took over. In the view of Catholic conspiracy theorists, the alleged ongoing Catholic Spring imposed from above will have the same disastrous results in the Catholic world that those movements had in the Arab world.

It is doubtful that a Catholic Spring in the Vatican will elicit the chaos of Libya or Syria. After all, the Vatican, although extremely powerful in many ways, is a tiny unarmed State. But, at any rate, Catholic conspiracy theorists overstate their case, when they consider that Pope Francis is actually leading a Catholic Spring (being controlled, of course, by Soros, Clinton and Obama). He is one more member of the same old petrified Catholic gerontocracy. 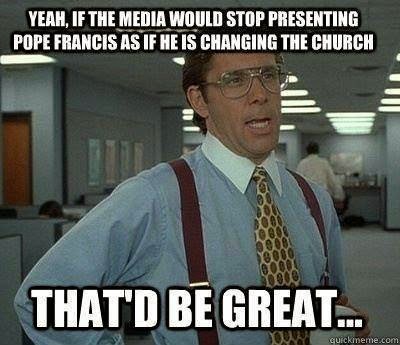 It is true that the present Pope has given the impression of being a liberal, especially when compared with his predecessor, the very conservative Benedict XVI. But, we should not be under the illusion that Francis is open to reforms. He would be more aptly described as a populist. His Latin American (and especially Argentinean) background may be relevant in this regard. Latin America has had multiple political leaders (Argentina’s Juan Domingo Peron being the most emblematic) who have no clear or even coherent political agendas, but who know very well how to attract crowds and appeal to the masses with calculated gestures. Perhaps the defining criterion of populism is trying to please everyone by constantly changing views or making vague statements and promises, but not really making meaningful changes.

In a way, John Paul II was this kind of leader, but Pope Francis has mastered these techniques even more. He is fully aware of the power of mass media. Just for show, he washes the feet of prisoners, in imitation of Jesus’ humbleness. He gains applause by paying lip service to the unprivileged and refugees. He goes shopping in Rome without bodyguards, but only when reporters are around. He jokes with journalists. He claims not to be judgmental of gays.

But then, he has done absolutely nothing to reform the Church’s murky financial affairs, especially the Vatican Bank. He rhetorically asks “Who am I to judge gay people?”, but then, he has condemned gay marriage as the “work of the devil”.

He has been too lenient with pedophilic clergy. When there was backlash against his outrageous support for Chilean bishops complicit in pedophilia cases, he eventually retracted. It may seem like a genuine moral rectification from a humble man. Yet, a more cynical (but ultimately correct) approach would point out that Francis likes to engage in the trial and error game, so typical of populist politicians. He first tries out something, waits for the popular reaction, and then depending on polls, decides to either carry on or change course.

Pope Francis jumps on the bandwagon of criticizing Trump (rightly so, of course), but only because it is an easy target. But then, he gives his blessings to the Castro regime in Cuba, remains silent about the dictatorial turn of Venezuela’s regime, and condemns the massacre of Rohingya Muslims, but not while he is in Myanmar.

Francis’ fellow countryman, Juan Jose Sebreli, is a major authority in the study of populism. He aptly describes the Pope by saying that Francis is a master in the art of “speaking much and doing nothing”, very much as the populists of Argentina’s political history.

There is no ongoing Catholic Spring, yet.