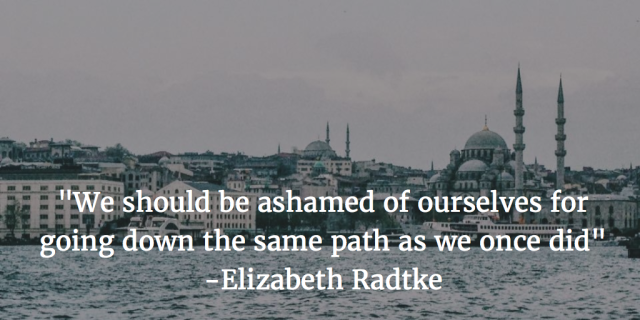 Turkey is by far one of the most beautiful and culturally diverse countries I have visited. Last month I had the opportunity to spend a little over a week in Istanbul, as part of the Canadian Delegation for the International Federation of Liberal Youth Annual General Meetings. While Istanbul’s city centre bustles with life day and night, it is also telling of the troubles Turkey is facing. People were on always slightly on edge, and popular civilian areas like Taksim and Sultanahmet Square gave off an aura of incertitude. Far too many innocent civilians have already died from terrorist attacks in Turkey. And unfortunately, I would speculate that we haven’t seen the end of them.

Why is this the case? From my conversations with locals in Istanbul, it seemed as though the momentum of Kurds in the Mid-East region has led to a growing sentiment of dislike towards Erdoğan’s governance. This dislike has now manifested into violence and acts of terrorism by sub-groups of the Kurdish population. These attacks have shaken the roots of the Turkish system. Specifically, groups like the PKK (Kurdistan Workers’ Party) reflects this escalating political tension between the Kurdish population and Turks.

What makes this violence even more complex is the fact that the West is supporting Kurds in neighbouring countries, thereby indirectly legitimizing the pan-Kurdistan ambition. The PKK pushes this desire for independence to the extreme through violent actions in order to demand greater independence and autonomy.

Similar to Iraq, there is a large Kurdish presence in Turkey, representing one quarter of the entire population. While Kurds were promised greater autonomy during the Turkish War for Independence (1919-1923), the government of the Turkish Republic implemented a discriminatory policy to eliminate non-Turkish traits, including Kurdish cultural and social elements. There was even a period where talking about ethnic minorities was illegal and punishable by the court. Just by saying the word “Kurd”, you could be imprisoned.

After coming to power in 2003, the Justice and Development Party (AKP) led by President Erdoğan brought some hope to the resolution of the Kurdish-Turkish conflict, which had been ongoing for decades and had resulted in the death of tens of thousands of people. He originally planned to reunite the groups by advocating for pro-peace policies. These, at first, resulted in an increased support for the AKP in Kurdistan territories. By the 2009 elections, however, it was clear that the main Kurdistan political party – People’s Democracy Party (HDP) – had regained the majority of the electorate in Kurdistan territories. Furthermore, AKP experienced a backlash of this approach by alienating a portion of the Turkish population in the rest of Turkey, who were against pro-peace and Kurdish integration policies.

In the last few years, President Erdoğan actively started to re-introduce discriminatory policies against the Kurdish people, mainly due to terrorist activities conducted by the the PKK, and potentially as a result of the HDP’s success to secure seats in Parliament. A portion of the Kurdish population continues to try to differentiate themselves from the PKK, as they do not share the same aspirations and violent approach to the issues they face in Turkey. Rather than adhering to pan-Kurdish ambitions, most Turkish Kurds desire greater integration policies to reduce discrimination and increase their  participation right in society. Why then is this blatant display of violence still occurring in Turkey?

“To this day, they remain the largest stateless people on earth” – Michael J. Totten

The Turkish government is, by all accounts, doing its utmost best to counter the numerous terrorism threats they are facing. The West is backing Erdoğan’s government and showing allegiance with other NATO allies in order to fight Daesh. However, in doing so, the West is also supporting Kurdish forces. While Kurds in neighbouring regions, especially Iraq, are doing their very best to fight Daesh, some Kurds in Turkey are instead fighting the Turkish state itself. A faction is growing angrier at the government due to social injustice and oppressive policies. Another portion of the Kurds, namely the PKK, has taken terrorist measures to claim their stake in national governance.

During my week in Istanbul, I had the pleasure of talking with members from the young liberal 3H movement, who explained to me the growing divisiveness between Kurdish factions. There exists many sub-groups that support and carry out some attacks in lieu of the PKK. Nevertheless, the PKK is the main Kurdish organization submitting to violence and extremism.

Specifically, the PKK is waging war against Turkey’s ruling party, and directly attacking fellow civilians. Considered a terrorist organization by the US and the West, the PKK has now carried out several car and suicide bombings throughout Turkey, all but compromising any potential of stability the country may have. Originally formed in 1978, the PKK’s goal is to create an independent Kurdish state. However, while their objective may be worthy in scope, achieving their goal through terrorism certainly is not appropriate by any standards.

The PKK is further supported by allies and sub-groups. Specifically, TAK – the People’s United Revolution Movement – claimed to carry out a disastrous car bombing attack earlier this year in Ankara. The PYD, a Kurdish force in Syria, is also an allied organization, aiding the PKK in disturbing unity and peace in the Turkish State.

Much like in Syria, the many Kurdish organizations within Turkey are creating a cluster of confusion that will eventually implode upon them. The question now is, why do we support Kurdish forces both in Syria and Iraq, but identify the PKK in Turkey as a terrorist organization? Why are we training and supplying weapons to the PYD in Syria (which has recently sided with Russia in the Syrian conflict and prevented assistance to reach Aleppo), and not the PKK (which has also conducted violent attacks and has sided with entities beneficial to their cause?) What differentiates both groups and explains the support from the West?

It is clear that both groups want to promote the Kurdistan right for autonomy and independence. Kurdish groups have agilely capitalized on international opportunities to legitimize their desire for greater autonomy and separate governance. In countries heavily affected by terrorism, including Syria and Iraq, Kurds have benefited from the presence of the West for training, arming and legitimization. In contrast, the PKK’s alliance with the Patriotic Union of Kurdistan (PUK) in Northern Iraq has resulted in travels to Northern Iraq for joint trainings. Instead of using these trainings for the greater good of defeating Daesh, the PKK is attacking its own home state.

What can be done?

Ultimately, the PKK has benefited from the military training received by Iraqi Kurds either by being part of the trainings in Northern Iraq or via knowledge sharing and joint trainings between the two groups. The West is arguably at fault for this training, thus leading to an uncertain future of Turkey and the PKK. This leads to the last and most important question: how can violent Kurds in Turkey, and in the region, drop their weapons and peacefully reintegrate the society? Do they need a separate state, as the pan-Kurdistan ambition would suggest, or better social policies and anti-discriminatory measures?

First and foremost, the West needs to stop training, inadvertently or not, PKK forces alongside the PUK in Northern Iraq. Equipping a terrorist organization with training and military weapons can’t be good for the US image. But, if the West were to internationally recognize the greater autonomy of Kurds in the region, the situation may become even more complex. Recognition, coupled with past training, is the recipe for creating a strong and defiant international force. Much like we equipped and ultimately created Al-Qaeda, we are beginning to do the same with the PKK. Are we creating a second Al-Qaeda?

However, the second option carries many problems as well. With Erdoğan’s government churning out discriminatory and anti-integration policies, it may arguably take a whole shift in government for Kurds to be better integrated in society.

For now, the West needs to seriously re-evaluate its efforts and support of Kurdish groups in Turkey and neighbouring countries. We should be ashamed of ourselves for going down the same path as we once did. If the PKK were to manifest into another terrorist organization as big and encompassing as Al-Qaeda, we are certainly going to have some dirt of our hands in the future.

We thank Rosette Gagnon-Belanger, former GSPIA student and current employee at GAC, who wrote half this article.