At the end of May, the long-awaited African Continental Free Trade Agreement (AfCFTA) came into force after being ratified by 22 governments the month previously. This agreement, which creates a single market of goods and services across the continent, encompasses 1.2 billion people and a total GDP of over $2 trillion. It is the single largest trade agreement since the creation of the WTO and is, by a wide margin, the largest free trade area in the world. While the scale of this agreement in itself is momentous it also means big changes on the horizon for continental trade and offers a major opportunity for African economies to build trade links with each other and slow the continued drain of resources away from the continent.

Is AfCFTA the Wealth of Africa? 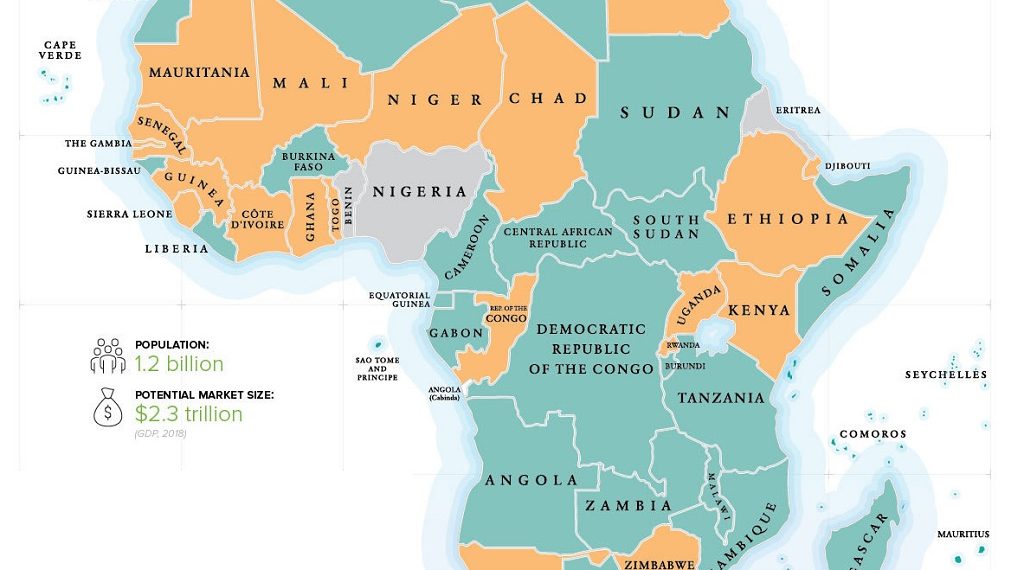 Enhancing trade between countries within Africa is a major goal of this deal, and there is much room for improvement. Currently, trade between African countries accounts for only 16% of the continent’s total trade, with the vast majority of African resources leaving the continent for economies elsewhere. The trade that does occur between African countries is largely restricted to the regional development and trade groupings that exist, such as SADC and ECOWAS. This is compounded by the fact that the majority of extra-continental exports are commodities and raw materials. This double effect of low intra-continental trade and high commodity exports is a drain on economic development across the continent and prevents the diversification and industrialisation of African economies. AfCFTA is slated to change all of this.

The reduction in tariffs and harmonisation of barriers implemented by AfCFTA is anticipated to dramatically increase trade across the continent. It is expected that overall trade within the first decade of the deal’s implementation will more than double, with half of this increase occurring by 2022. Much of this increase will be driven by cross-grouping trade, trade between and outside of existing regional trade groups, creating a more integrated continental economy and breaking the trend of creating regional silos. The agreement is expected to only increase trade within these existing groups by 14%, meaning that creating links between members of different groups will be driving the lion’s share of the growth in trade.

A key component of this increase in trade will be infrastructure improvements to increase the quality of the physical links between African countries. Many countries in Africa trade with extra-continental economies more than their neighbours because of the lack of suitable infrastructure. The pressure to build and improve infrastructure between countries on the continent will be a boon to domestic economies in terms of increased employment and investment, but it will also compound the gains in terms of trade by allowing increased physical integration to accompany the regulatory and market integration under AfCFTA.

The creation of new trade links between countries on the continent and the retention of resources and products within Africa will create new pressures within African economies themselves. The development of more robust intra-continental trade links will foster the creation of more African-based supply chains to benefit from the reduced continental tariffs. This should add fuel to the nascent manufacturing boom in many economies and will help diversify those that have until now been unable to. Gains from increased productivity and cheaper goods are expected to be in excess of $3 billion annually, drastically growing incomes across the continent. This comes at a time when low-cost manufacturing is facing pressure in South East Asia and is seeking to relocate. Africa has often been singled out as the next stop for this manufacturing. The benefit that AfCFTA provides is an incentive to keep these future products on the continent, rather than allowing African economies to become the manufacturing plants of the developed world. In this way, African manufacturing can benefit African consumers as well as the rest of the world.

Whithering Nigeria, why the hold up?

Along with all the fanfare around the agreement, one potential participant has been noticeably absent. Nigeria has so far (along with Benin and Eritrea) not signed on to the agreement. The government has repeatedly said that it needs to consult with domestic stakeholders and it is unwilling to agree to anything that may hurt local manufacturers and producers. This is a detriment to the agreement; as Africa’s largest economy and most populous country, Nigeria has much to offer and its inclusion would be a huge benefit to the other members of AfCFTA.

Nigeria’s concerns are not unfounded, while the agreement holds the potential for great benefits for Nigeria, its producers, and its consumers there is a short term threat to existing manufacturers in the country. Nigeria has until now benefited from its economic situation to create a relatively successful local manufacturing sector. Many of these firms may be threatened by the increased access to other firms that joining the agreement would mean. Further, even though Nigeria is poised to benefit from AfCFTA, its heavy reliance on oil means that it is likely to benefit less than more diversified economies such as South Africa and Egypt.

Despite the concerns of Nigeria’s government and businesses, there is little to be gained from holding out against the deal since the majority of Africa’s other economies have signed on. While there are risks to opening up to other countries, Nigeria is in danger of being left behind and isolated from the new continental trade trends that AfCFTA will develop. This could mean losing out on being heavily integrated into continental supply chains and a necessity of relying on extra-continental exports instead, creating further problems for an economy already beset by over-reliance on commodity exports. In the end, joining the agreement and working with other economies on the continent will benefit Nigeria far more in the long run than defending existing stakeholders’ positions for the short term will.

Currently, the non-African country poised to gain the most from this new agreement is China. Its investment in the continent has been steadily growing in recent decades and it has been working extensively to build free trade zones in various countries. This trend has always been a bit of a double-edged sword, as the recent fracas over the port at Mombasa demonstrated, but with the creation of AfCFTA there is real potential for China to insert itself into the continental economy and in doing so could potentially diminish the gains to African countries.

China and Chinese companies have been making infrastructure investment in Africa a priority for a while and the Belt and Road initiative was a recent formalisation of this trend. The new links that AfCFTA will both require and generate will mean major new infrastructure investment. These projects will be an opportunity for African economies to create jobs and lead domestically, but they are also an opportunity for increased partnership with China. Neither of these opportunities is necessarily bad, but African economies need to be careful that they don’t over-leverage to attract Chines investment and so lose the domestic gains that this infrastructure should be providing. Deals that compromise existing assets in order to quickly build new ones are not necessarily a net gain and can often mean a loss.

One of the major positive impacts of AfCFTA will be an increase in manufacturing in African economies. This will be a realisation of growing pressure within South East Asia to relocate low-cost production elsewhere. A major driver of this pressure has been an effort by Chinese manufacturers to shift production of goods for Chinese consumers. African economies will be an attractive destination for these companies. This poses a problem as the principal gains from AfCFTA in terms of manufacturing will be felt by the ability of African products to be sold in other African countries, strengthening the continental industrial market. While producing low-cost products for the Chinese market will be beneficial in increasing manufacturing capacity, the real gains for African consumers will not be realised if the majority of goods manufactured on the continent are shipped outside of it.

AfCFTA provides an opportunity for African economies and Chinese companies to build an improved mutually beneficial relationship, but African governments need to be careful in what they sacrifice for investment. This trade agreement has enormous potential to improve intra-continental trade links and fuel economic growth across the continent, but governments need to avoid the temptation of quick and easy solutions often provided by outside help. AfCFTA is an African agreement and it should be used to primarily benefit African companies and consumers. 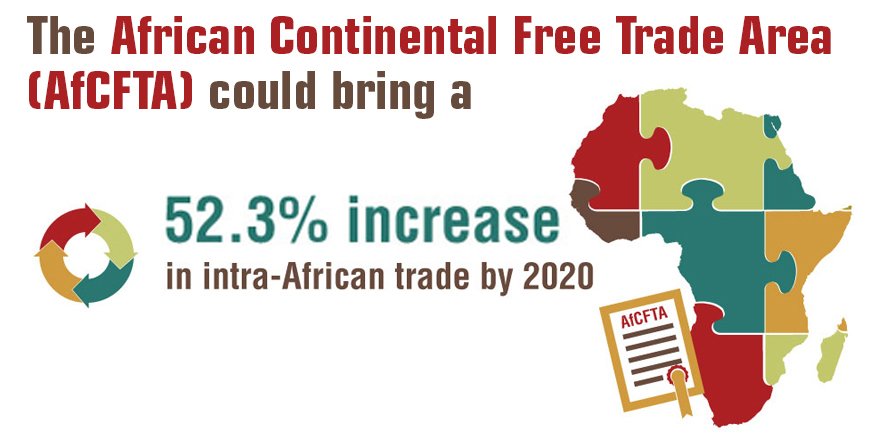 This monumental agreement, with an ambition to create the first continent-wide free trade area on earth, has the potential to help African countries seize control of the winds of change that are blowing across the world economy. This is a chance to redirect globalising forces to benefit the continent and help slow the removal of African resources for the benefit of others. That being said, the path forward is not fully clear. The agreement is not solidified yet, despite its ratification, and still needs agreement for details on tariff schedules and rules of origin. These are going to be especially complex due in part to how interlinked many countries’ supply chains are with countries outside the continent. Determining the level of continental value added to goods to classify them as ‘African’ will be a major factor in determining how and which countries benefit the most. Beyond this, there is also the problem of enforcement and creating a collective, supra-national body to supervise adherence to the agreement.

These obstacles are not necessarily as problematic as they are frequently made out to be, as they largely rely on political will. The creation of this agreement has been a continental exercise of political will; one that demonstrates the determination of governments on the continent to work together for the collective benefit of their populations. In the end, this agreement is what individual countries make of it; it is not a panacea that will create a prosperous continental market by itself. Political buy-in is important and governments have so far shown their commitment to seeing this project through. Now it is time for governments to finalize it and fully commit to creating a pan-African market. The future for trade within the African continent is bright, and this light will make the lives of over a billion people easier and wealthier so long as it is harnessed and guided correctly. It is now the responsibility of governments across the continent to make sure these forces of trade are used to the benefit of the population.