Since last year, the United States has been trying hard to take back control of negotiations with North Korea.  It now seems that there is going to be a step backward in US-North Korea relations after the outbreak of the Coronavirus (COVID-19). North Korea has not reported any cases of the virus although Washington has claimed that this could be government propaganda. Either way, relations between the US and North Korea are likely to further worsen with the coronavirus outbreak, and with few or no cases North Korea could be given a diplomatic advantage.

Second, negotiations between the United States and North Korea have continued to stall. With the coronavirus outbreak, it is harder to advance negotiations. The outbreak of the virus has had an immediate impact on the economic development in China, South Korea, and Japan. Especially in South Korea, where the severe spread of the virus forced the US to lock down its garrisons. For North Korea, although its economy heavily relies on China, Kim’s recent activities are intended to show that North Korea is not affected by the virus and is doing business as usual. Meanwhile the U.S. is still unlikely to reduce sanctions against North Korea, so North Korea will continue negotiations under sanctions.

Third, North Korea is using the outbreak period of the virus to build a self-reliant economy. For North Korea, the priority is to restore an economy under stress from sanctions. Since the border with China is nearly shut down, North Korea’s government has been trying to save its domestic economy by using every possible method to extract resources from the sea. In recent months increasing numbers of North Korean fishing boats have operated in the Sea of ​​Japan which has caused friction with neighboring countries. North Korean fishing boats are forced to stay in exclusive economic zone (EEZ) in Japan and Russia, where there are abundant fishing grounds. With the onset of virus, it is anticipated that there will be more fishing boats heading for the EEZ near Japan, South Korea and Russia to do full-scale fishing.

If cases continue to emerge in the United States but not in North Korea, Washington will be distracted and weighed down in other regions and at home. North Korea meanwhile will face no such barriers, granting the country greater agility and greater room to pressure their rivals in Washington. While the US and Europe, plus regional rivals like South Korea and Japan, are distracted fighting the COVID-19 crisis, North Korea is now dealing with adversaries mired in something too urgent to counter any of Pyongyang’s maneuvers. Washington will need to react to any aggression from Korea with a strong hand or it will risk allowing North Korea to operate with a new boldness as its normal counterbalances and consequences are absent.

However, there might be some serious consequences for North Korea if the outbreak is not handled well. A potential risk is North Korean underworld activities. Since North Korea is ill-equipped with its healthcare system and is highly vulnerable to coronavirus, care has to be taken that the virus does not spread through illicit smuggling through its borders. In February, police in North Korea has issued a decree that warns of stronger punishments – including the death penalty – for smugglers. Another development that worries North Korea is its relations with other rogue nations such as Iran. Iran has developed a close working relationship with North Korea on ballistic missile programs, and arms sales (and illicit arms smuggling) and is an important source of North Korean economy. Nevertheless, Iran is one of the countries suffering the most from the outbreak of coronavirus. North Korea needs to be more cautious when working with Iran.

After the outbreak of COVID-19, there are no signs that North Korea will renounce its military operations as well as economic aggression on the high seas. If North Korea manages to control the spread of the virus in their country, and China continue to provide substantial assistance, North Korea could suddenly be at an advantage in negotiations. Everyone else suddenly has bigger problems on their hands – for now at least! 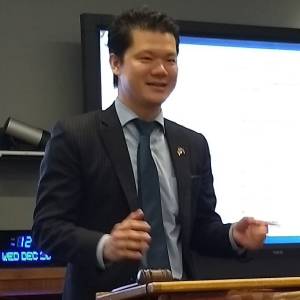 Our special guest author is Leo Lin. He is the co-chair of the Information Warfare and Intelligence Discussion Group in Washington DC, Young Professionals in Foreign Policy.