Should We Stay or Should We Go?

Enough with the economic spin out of Brexiters 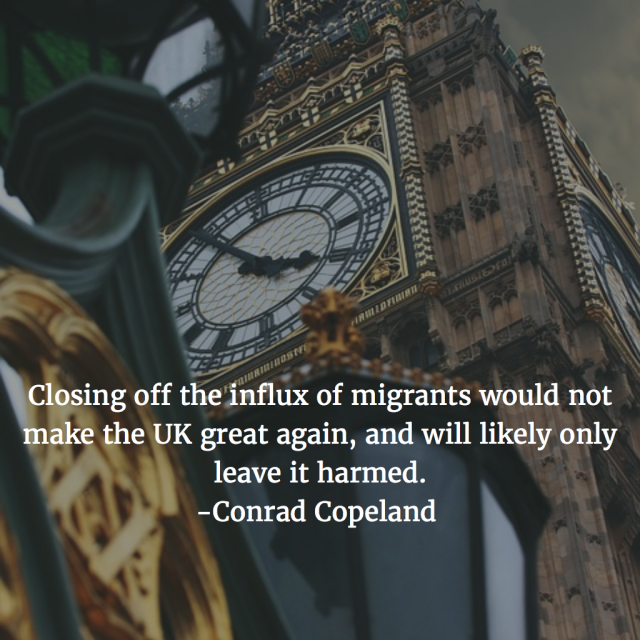 Next month the United Kingdom makes a momentous decision: it going to stay a member of the EU or dismantle itself from Europe.  Those advocating for Brexit have made a number of claims regarding the economic benefits of leaving and the economic costs of staying.  There are serious economic implications of the Brexit vote, both for the UK and for the rest of the EU, and having the facts is necessary for an informed decision.  Brexit will hurt the UK economically, both in terms of trade and in terms of wealth. There are three principal economic issues surrounding the vote:  the cost of the EU budget to the UK; the trade benefits of being in the EU; and the issue of immigration and free movement of labour.

There has been much debate between the stay and the Brexit sides about the cost of EU membership, even though it is relatively straightforward thing to check. The data is simple, and it shows that the EU budget is not a significant portion of UK government spending.  The rules around the EU budget are that it consists of 1 percent of the Union’s GDP which translates into each country contributing 1 percent of its GDP to the EU budget.  This is not a massive amount considering all the subsidies and investments the EU gives to member states, but that’s not even what the UK contributes.  Due to a special agreement negotiated between the EU and the UK 25 years ago, Britain gets a significant rebate.  This means that it pays less than the supposed 1 percent (the real figure is around 0.5 percent), while other members pay more, with no commensurate decrease in benefits.  Given this, the budget issue should be a complete non-starter – the UK gets an unbelievable discount and if it were to leave it would need to pay full price for access to the common market, much like Norway does now.

This brings us to the issue of trade.  If you listen to proponents of Brexit, they say that essentially nothing will happen to the trade relationship with the EU.  In fact, Brexiters argue that the UK could be even better without the EU; claiming that the UK would be free to negotiate agreements that it wants with countries that it wants, producing just as much trade as being in the EU.  Some even go as far to argue that the UK could get the exact same benefit as being in the EU by leaving and just dropping all tariffs to zero.  With tariffs already at historically low levels and many of the costs of modern trade being non-tariff in nature, this argument does not hold much water.  One of the greatest benefits of the EU is its reduction in the cost of trade, both through lowering tariff and non-tariff barriers.  Arguably, the reduction in non-tariff barriers is the most significant.  The vast majority of trade conducted around the world today does not face significant tariff barriers, the WTO and the increase in trade in intermediate goods has heavily reduced these.  This has impacted world trade so much that the UK lowering all tariffs to zero would not have a huge impact on trade levels.

Trade with the EU itself is another issue entirely.  If Britain were to leave, it would no longer have access to the common market.  So what will happen to the trade balance of the UK if it leaves the EU?  This issue isn’t clouded in mystery, significant amounts of research into this issue have been published and the statistics show that a huge proportion of British trade is conducted with EU member states. 48 percent of UK exports go to EU member countries and 51 percent of UK imports come from them.  It wasn’t always this way.  When the UK last considered leaving the EU in the 1970s only one third of UK trade was with member states of the EEC (the precursor to the EU).  Since then, the EU has grown trade between member states by an average of 55 percent and become the principal trading partner for the UK.  With trade making up around 60 percent of UK GDP, this means that a full 30 percent of British national income (or GDP) is dependent on trade with the EU.  This level of integration will be difficult and tumultuous to unravel and it is hard to conceive how disruption of trade with the EU would not negatively impact the national income of the UK.  Most studies show that the UK leaving the EU will reduce trade with EU countries by about a quarter and lead to a decline in British GDP of between 3 and 9 percent per year.  This is significant; in the best case it translates into costing each Briton approximately £1700 per year.

It has been found that if trade for a country decreases then national income will decrease leaving the citizens and country worse off. There’s a general consensus in economics that the link between trade and national income is between 0.5 and 0.75 – this means that for every 1 percent reduction in trade, a country’s GDP will fall by between 0.5 percent and 0.75 percent (with an average of the two being 0.625 percent).  Taking this economic consensus around dynamic trade theory you can easily apply it to the case of Brexit. This will give a rough idea of what the trade impact will be from separating from the EU.  If total trade with the EU is estimated to fall by a quarter with Brexit, that is a total loss of 12.5 percent of UK trade.  Using the stylized fact of a loss of 0.625 percent of GDP, that means a hit to UK national income of 7.8 percent.  For perspective, this means that Britons would be £2400 poorer, year over year due to Brexit.

Proponents of Brexit have another trade related gripe with the EU – they find all the rules and regulations stifling and argue that they hurt the British economy.  They tend to think that the adverse trade effects of leaving the EU could be remedied by signing trade agreements with the EU and would benefit the UK by removing all those pesky regulations and EU standards.  However, in order to access the common market the UK will still have to accept all the EU rules and regulations.  This is the part that seems to be the most overlooked: the whole point of the EU is to standardize product regulations for both goods made in the EU and goods imported into the EU.  As Norway knows all too well, being on the outside and trying to send products into the EU means effectively adopting all EU standards and rules.  So if the only way to remove the rules and regulations that the Brexiters worry so much about is to stop all trade with the EU after Brexit, then one can only assume a catastrophic loss to the UK economy – though I doubt this is what proponents of leaving the EU have in mind.

This leads directly into the discussion of sovereignty.  Brexit supporters tend to feel that the supranational authority of the EU impinges on the sovereignty of the UK government.  Arguably, a Brexit would actually give the UK less control by forcing it to adopt rules and standards that it would no longer have a voice in determining.  By leaving the EU, the UK would forfeit all the seats it has at the EU governing bodies and regulatory agencies; it would sacrifice all influence in EU decision making.  Add to this the plausible result that the UK will be forced to comply with the EU rules and regulations for trade access and you have a situation where the UK would effectively be hostage to a foreign power, something the Brexiters would likely bristle at.

In the vein of sovereignty, a pinch of xenophobia has come to the surface around the issue of immigration facilitated by the EU. The rhetoric by proponents of Brexit grossly misrepresents immigrants, especially from the EU, and their contribution to British society and state. Closing off this influx of people would not make the UK great again, and will likely only leave it harmed.  This isn’t even touching on the issues surrounding the 1.2 million Britons who reside in the EU right now and would likely have to come home.  Net migration into the UK from all sources was 250,000 last year and migrants from the EU make up about a third of total migrants to the UK.  This shows that migration is significant for the UK, especially from the EU; but the issue is whether or not the impact is negative.  Brexiters often argue that EU migrants come to the UK and then drain the welfare state without contributing anything to the system; studies have shown this to be false.  Immigrants from the EU are 25 percent less likely than native Britons to apply for state benefits and tax credits and they are 10 percent less likely to apply for social housing.  Overall, they tend to contribute more to the welfare state on average than they ask from it.  Interestingly, this means that a Brexit may take funds away from British social programs rather than save them money.

Further, the idea that EU immigrants take jobs away from native-born Britons is not demonstrated by the data.  Studies show that in general, immigrants and native-born workers are not close substitutes; rather, existing immigrants and new immigrants are close substitutes.  The implication of this is that new immigrants are more likely to take jobs from existing immigrants than they are native born workers.  While that may be good news for nativist Britons, it’s not very good news for recent immigrants.  The issue is whether this result applies in the same way to EU migrants in particular.  Study after study has shown that there is no relationship between immigration from the EU and unemployment.  Migrants from the common market have no impact on native-born labour force outcomes.

In the end, it is important for the UK to have a serious discussion about whether it wants to be a part of the EU.  Each Briton will have to make up their own mind, but it is important that economics is not misused to try to paint a picture of the EU that is heavily biased.  The cost of the EU budget is not large; the benefits from trade are significant; and the impact of EU migrants is in reality a net positive.  Understanding these facts will help in making an informed decision and will prevent any unfortunate realisations after the fact. Economically speaking, it is far better for the UK to be in the EU than out.