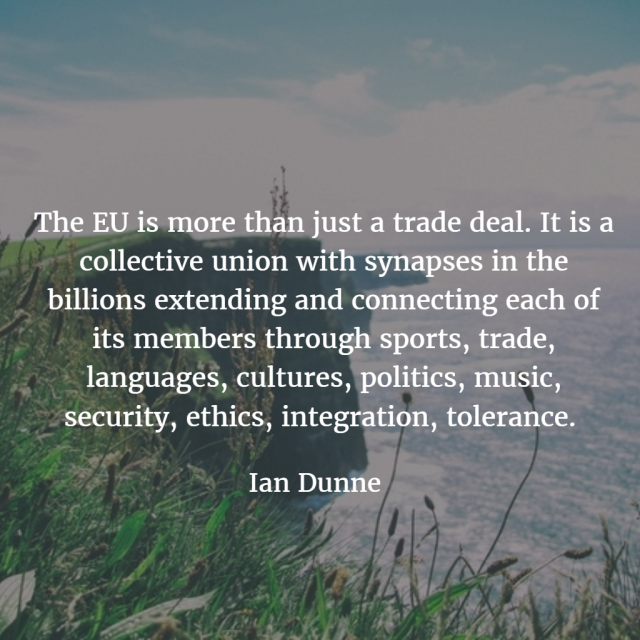 As an Irishman and a European, my initial reaction to the Brexit result on Thursday 23rd June of the UK voting to eject itself from the European Union came as a shock. I thought it inconceivable that a member, and particularly one as major as the UK would leave, not to mention this decision being backed up by popular democratic vote. Past that initial shock however the fog began to clear, and we shouldn’t really be all that surprised. We should however be concerned about its future implications for Ireland, and whether it will affect the special relationship we have developed with the UK in recent years.

The fallout from Brexit for Ireland will have both repercussions both politically and economically. The UK is a huge part of Ireland’s trade, making up about 1.2 billion Euros each week in goods and services. The budget spending increases planned for October by the Irish government of this year may well and truly sink as a result. While the Sterling has fallen dramatically – and this will affect Ireland without a doubt – it is hard not to see the currency recovering after its initial shock. It now has the potential to negotiate trade deals using its financial power base with its Commonwealth networks, albeit all of this will take place outside of the common market of the European Union.

Looking north, I think that Northern Ireland’s situation will not change in the short-term. While First Minister of Northern Ireland Martin McGuinness of Sinn Féin has called for a border poll on Irish reunification, it is not the moment for such measures that would without a shadow of a doubt drastically upset the Peace Process. Sinn Féin need to take the long-term view rather than attempting to take the common ground on these developments.

I want to see a United Ireland in the future, but only one through democratic means and not after such political upheaval as we have seen in recent weeks. Attempting to move things quickly will only lead to defensive measures by those seeking to protect their way of life within the union. Northern Ireland is gradually and delicately constructing a state, and while its future borders are very much open to debate, it needs those very structures to be able to decide its future when the time comes to do so. People in Ireland want peace first. Further short-term political upheaval would bring conflict rather than peace, and achieve nothing for nobody.

Brexit will have a say now in the north, and also for Anglo-Irish relations. One of the fundamental aspects of the Peace Process in Northern Ireland was the breaking down of borders and removing them much like the EU has done with its member states. Re-erecting those borders would for me present Northern Ireland with a deeply fundamental question on where its future lies within the UK. Borders are in nobody’s interest, yet will be technically required since the UK will soon be no longer at the table in Brussels. Ireland will be the closest thing the UK has to a voice in Brussels.

Taoiseach Enda Kenny has already defended Scotland’s right to remain in the EU after it voted overwhelmingly to do so. Not exactly what the Brexiteers want to hear, but it is in their interest to cosy up to the Irish government now that they have zero influence within the EU. Our special relationship with the UK should be nourished, as it has contributed healthily towards reconciliation not just in the north, but in the Republic and in other parts of the UK. It has promoted trade enormously, and allowed developments to take place a lot quicker between all parties involved.

What is a certainty is the necessity to take clear and conscious steps in the next couple of years to reach a beneficial solution for Ireland, the UK and the EU. Taking a hammer to the problem will only add physical wounds to the articulation of nonsense circulated by the likes of Nigel Farage and Boris Johnson.  Take back our borders, Take back our sovereignty, Take back our expenditure just do not add up. “Make Britain Great Again”. Brexit was won more on lies, fear and ignorance of the facts, putting the blame on the likes of immigration and not recognizing the actual issues or benefits of the EU that could of been changed internally. Britain will have to grapple now with its idea of modern nationalism and the class divides that can be clearly seen in the results of Brexit.

Reassuringly, Chancellor Angela Merkel – who faces her own domestic political fight – has advised member EU states to “avoid drawing quick and simple conclusions” from Britain’s exit “that could further divide Europe”. This would reinforce Ireland’s position going into negotiations between the EU and the UK. Ireland may likely desire for the UK to remain in the common market and for a free common travel area in Northern Ireland. Such moves would actually soften the blow to the UK for leaving. Conciliatory initiatives would undermine the more hardline ‘punish the UK’ members, and may promote in the long-term the UK’s ability to survive on its own, if it does retain its own union. This would give credibility to leaving the EU, and further disintegrate it. A slight paradox there, but nobody has anything to benefit by treating the UK harshly. It is more likely to undo itself anyway. The European Union doesn’t need to get involved in a fight, but promote now more than ever before its ideals of integration and community.

And anyway, The EU is more than just a trade deal. It is a collective union with synapses in the billions extending and connecting each of its members through sports, trade, languages, cultures, politics, music, security, ethics, integration, tolerance. It is in the interest of others to dismantle it for their own gains. Telling people that immigration is the real problem is doing a disservice to the very people Britain has benefited from during those days of empire, not to mention those very people who fought and died for that empire.

The decision has manifested itself in the coming of Theresa May to the position of Prime Minister. May has said it would be “inconceivable” that the invisible border separating the Republic of Ireland and Northern Ireland would not be affected by Brexit. Tariffs and some form of control would be implemented according to her. All of this comes from the person who scrapped the UK Human Rights Act, thus ending the jurisdiction of the European Court of Human Rights in the UK. May’s appointment creates more uncertainty over Ireland-UK relations, and doesn’t do anything to put to bed the uncertainty over the border in Ireland that has worked so well for the Peace Process due to its inexistence.

The “European super-state exercising a new dominance from Brussels” as Margaret Thatcher put it in her famous 1998 ‘Bruges’ speech will have its embrace forcibly removed. It is weaker without Britain, a country with a great tradition in Europe. Rather than staying and fighting for internal reform, its loss will absolutely be felt. I believe however that its departure will remind us all of who we are as Europeans, what the EU means to all of us, and it’s importance in carrying us out from the dark shadows of the Second World War into an era of community and cooperation.